04 /Feb.2020
The 6 Restaurants in Kansai to Enjoy Japanese Cuisine after Hanami 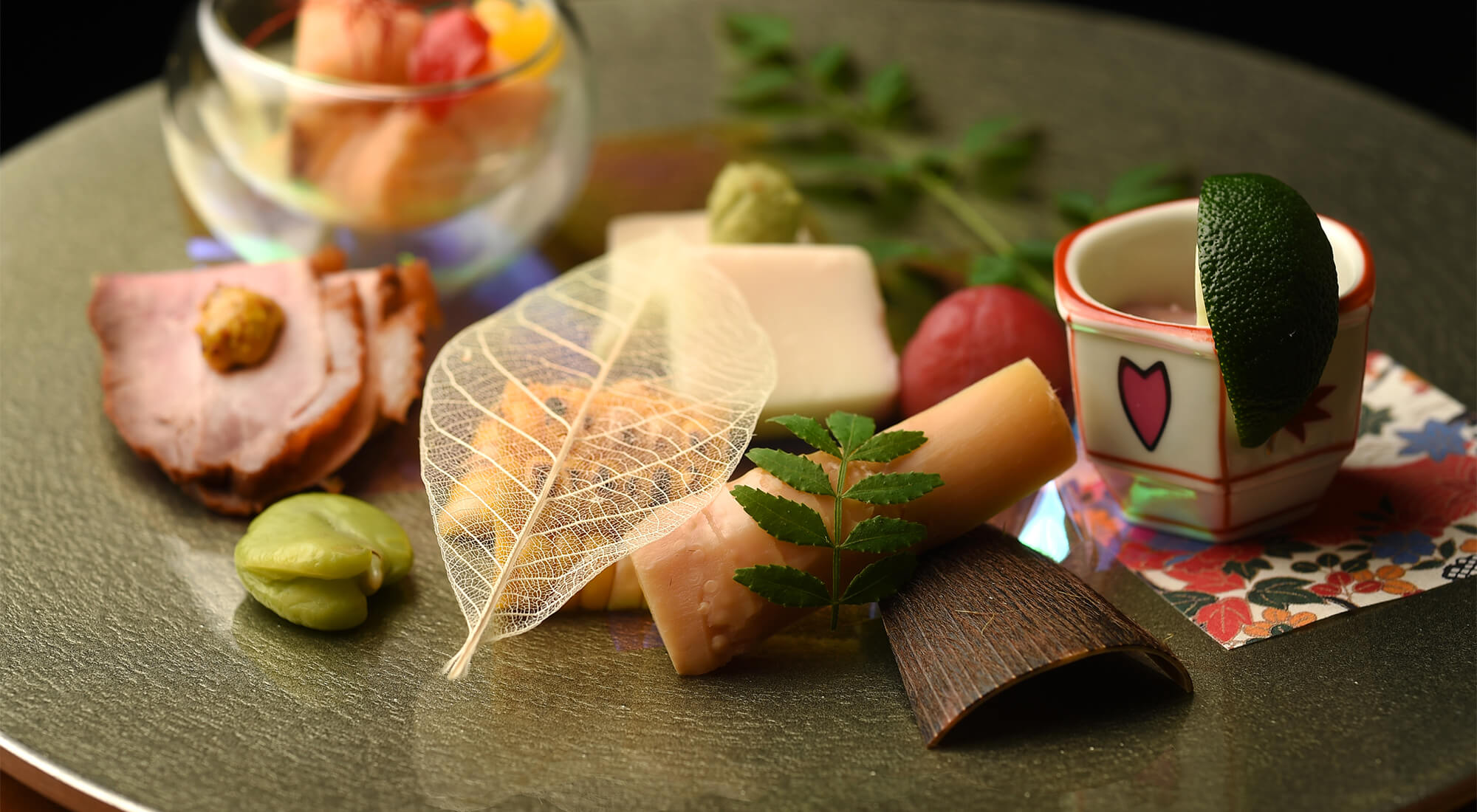 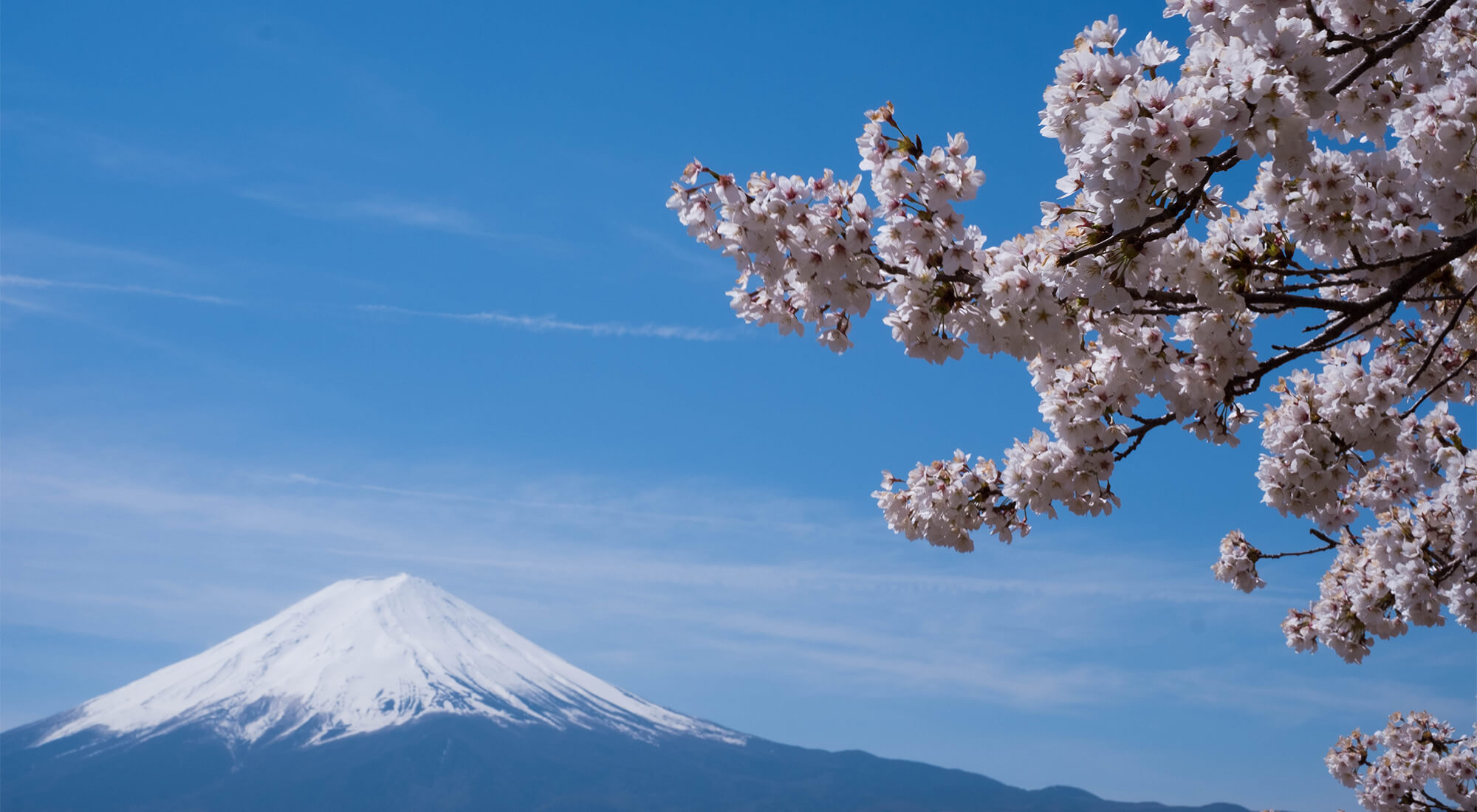 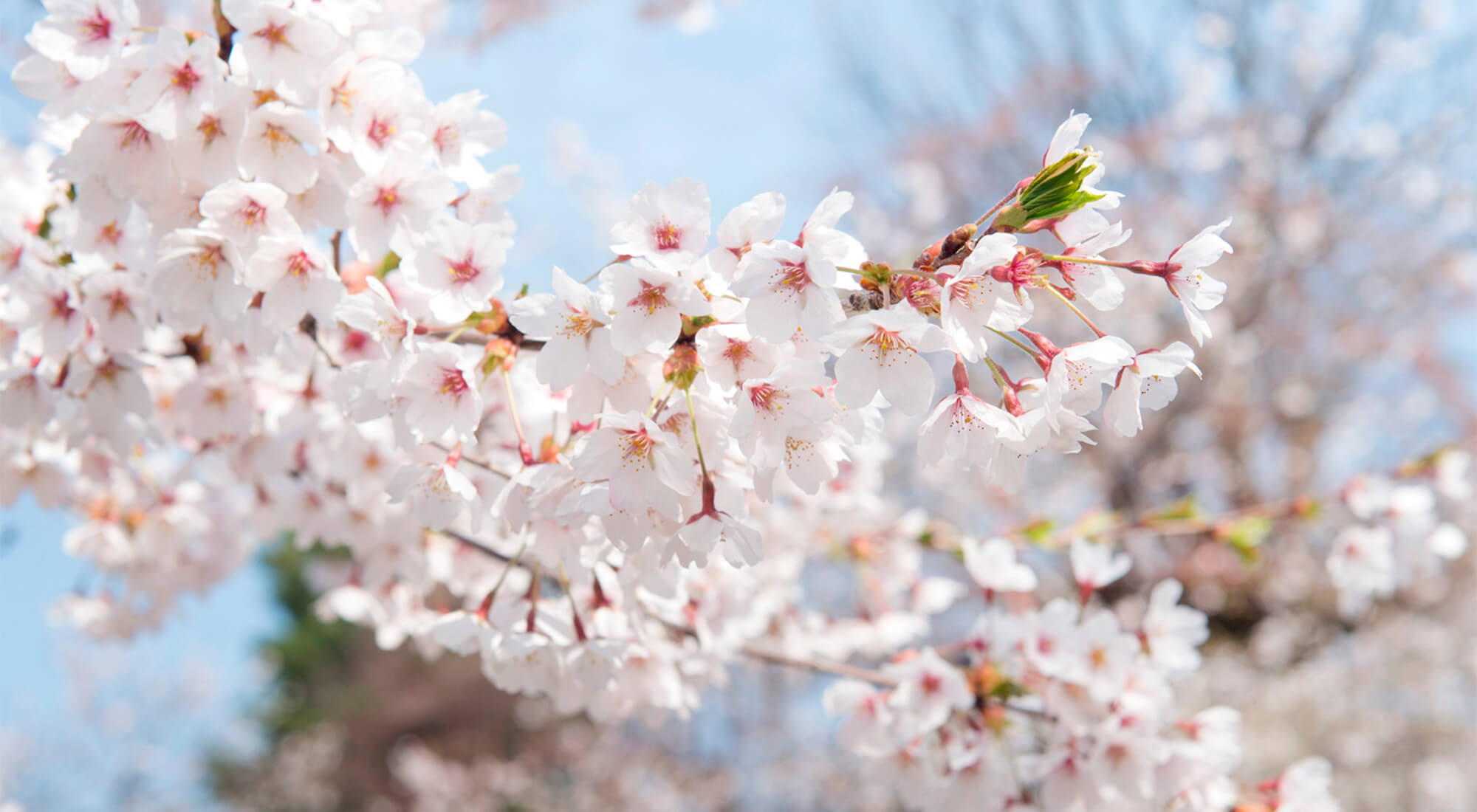 07 /Feb.2020
Restaurants in Fukuoka Where You Can Enjoy Your Meal While Viewing Cherry Blossoms 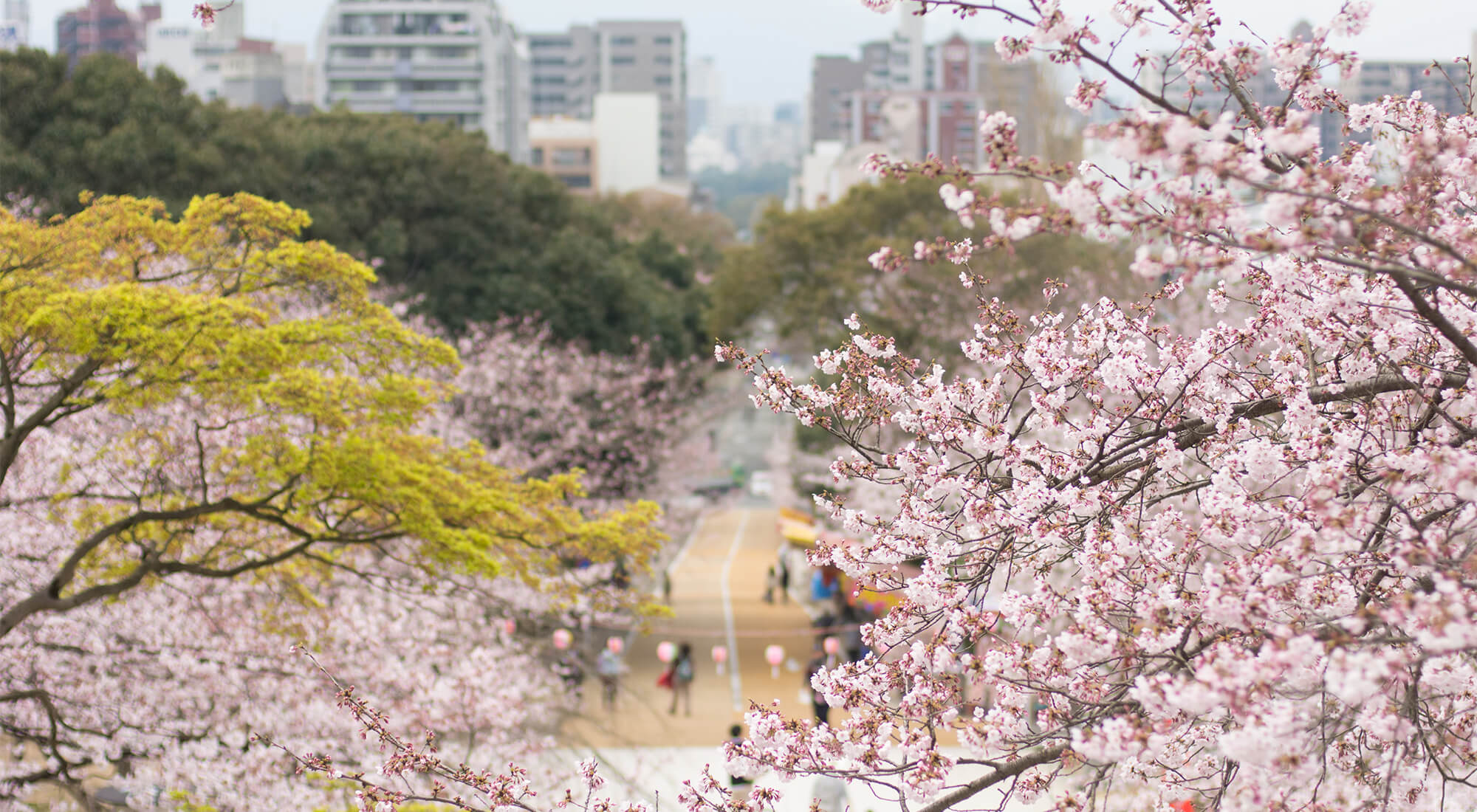 Fine dining near the cherry blossoms 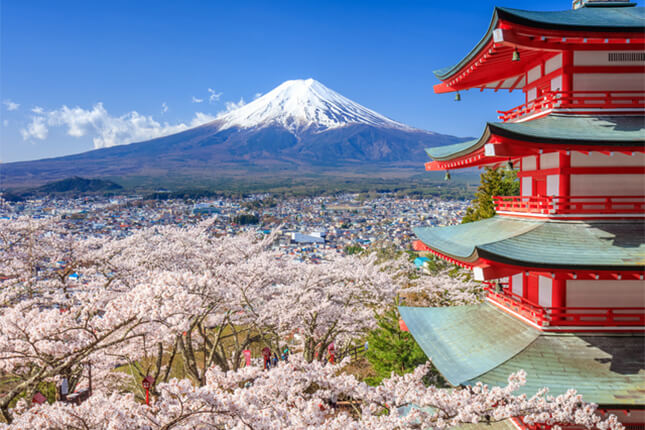 Hanami (flower viewing) is a popular spring event which Japanese have been enjoying for centuries. It was believed that Sakura was tree where the deity of rice paddies who came down from the mountain lives. Nobles in the Heian era (794 - 1185) loved Sakura as the symbolic flower of spring. They used to compose poems and enjoy hanami party with the deity. In the Edo era (1603 - 1867), formers welcomed the deity of rice paddies with the dishes and sake under the sakura trees, as a festival to pray for a good harvest. Later, hanami spread to ordinary people and became an indispensable spring event. 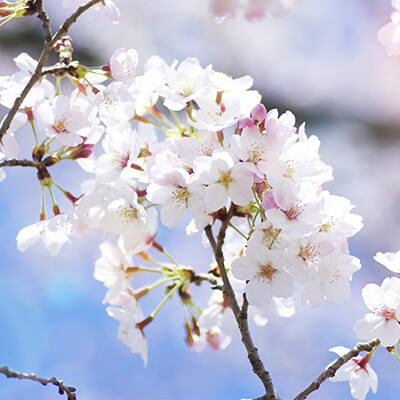 It’s a typical sakura and one of the most famous variety grown throughout Japan. The cultivation started between the end of the Edo era and the beginning of the Meiji era. Every year, it starts blooming around March 20 in Kyusyu and Shikoku area, then late March in Tokyo, and middle of April in Tohoku area finally. This variety is suitable for hanami or observation since it blooms all at once under the same conditions. Its five-petaled flowers bloom before the leaves. The color of the flower is pink, close to white. 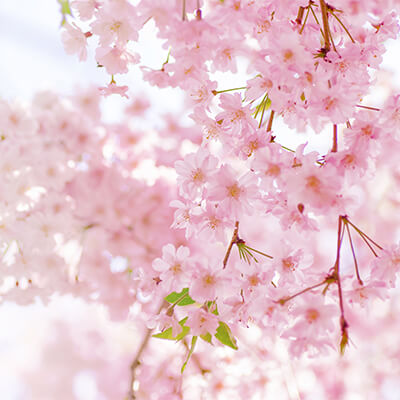 It starts blooming from the end of March to April. ( 1 week earlier than Somei Yoshino.) As the name suggests, the branches are long and drooping (“shidare” means “to droop”). Shidare Zakura is a general term for Sakura which has the whippy branches and droops under its own weight. Most of them are varieties of Edo-higan, and the flower color is white and light pink. Yozakura (The night sakura) at Rikugien garden in Tokyo is famouse. 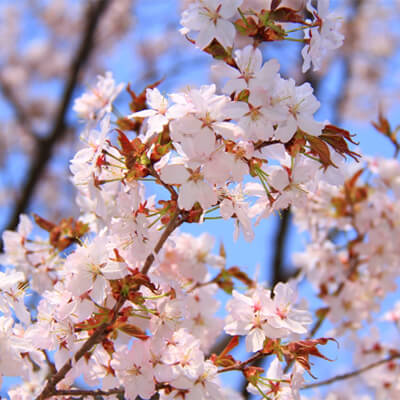 This variety is distributed in Honshu further west than Miyagi, Shikoku, and Kyusyu. It can be spotted in Kanto area, Chubu region, and western Japan. As it grows naturally in the mountains, "Hanami" meant to watch Yamazakura in the old days until Someiyoshino appeared. The blooming starts in April from Kanto. The flower is light pink. One of the characteristics is that the leaves come out at the same time as blooming.

How to enjoy Hanami 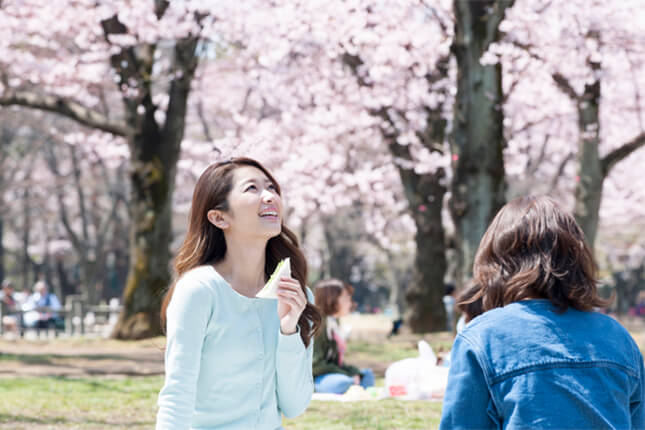 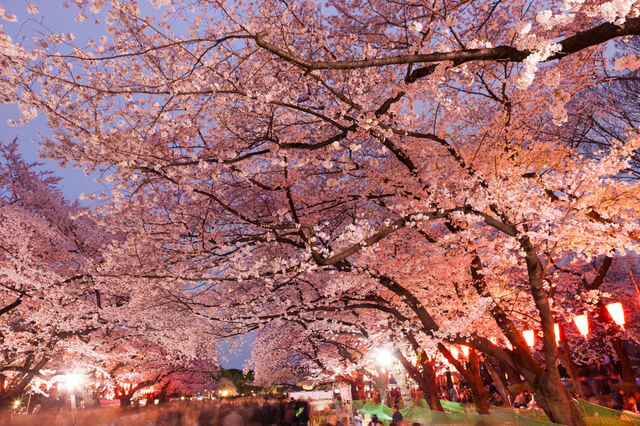 If you go to Hanami with a loved one, daytime is recommended. After taking enough time to walk along the riverside until the evening, go for a dinner in a fine restaurant, and you can have a great conversation. When you are with your family, you can enjoy picnic. Is it a typical Hanami style to have the handmade bento (lunch box) and beer under the sakura trees. Sometimes you can enjoy food strolls at the festivals during the peak bloom period. Don’t miss Yozakura, illuminated sakura at night too! 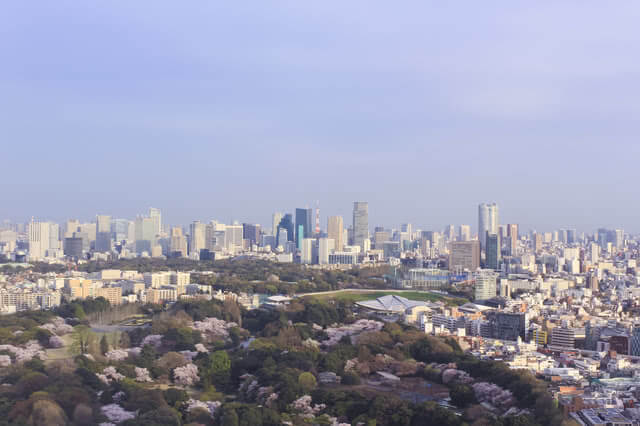 There are about 65 kinds of 1000 sakura trees in a large garden located in the metropolitan area of Shinjuku. Since each kind blooms at different times, you can enjoy various types of sakura for more than 2 months.
Access： 10-minute walk from the south exit of Shinjuku station on JR Lines, Keio Line, and Odakyu Line 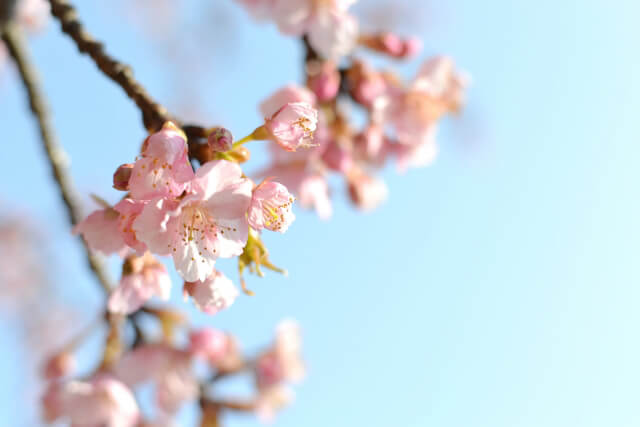 Yoyogi Park is a 54 hectares park for recreation and relaxation located in central Tokyo. In spring, many people come to see about 600 sakura trees blooming. You will be fascinated by "sakura tunnel" in the area of Sakura no Sono (sakura garden). Enjoy the contrast between sakura and the blue sky.
Access：JR Harajuku Station, Meiji-jingu-mae Station of Yoyogi-koen Station on Tokyo Metro, Yoyogi-Hachiman Station on Odakyu Line. 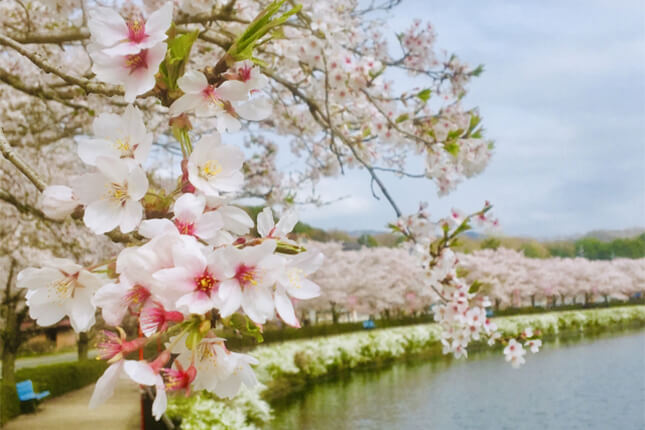 Ueno Park is a representative Hanami spot in Japan. It has a history of 400 years and has been famous for its sakura from the Edo era (1603 - 1867). About 800 sakura trees are planted in the park. When the flowers bloom, a festival called "Ueno Sakura Matsuri" is held. You can also enjoy Yozakura (viewing sakura at night).
Access： 2-minute walk from Ueno Station on JR Lines, Ginza Line, Hibiya Line. 1-minute walk from Keisei Ueno Station on Keisei Line. There is a pay parking lot near the Park Gate exit of JR Ueno Station. 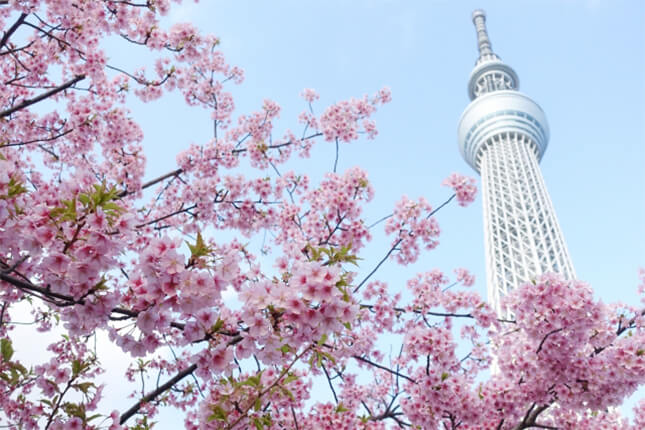 Located near the Tokyo Skytree, Sumida Park is a famous Hanami spot from the Edo era. About 640 sakura trees line along the riverside from the Azuma Bridge to the Sakura Bridge. You can enjoy the special illumination of the Skytree during sakura season, as well as the flowers lit up at night.
Access： 5-minute walk from Asakusa Station on Tobu Isesaki Line and Ginza Line. 7-minute walk from Honjo-azumabashi Station on Toei Asakusa Line. 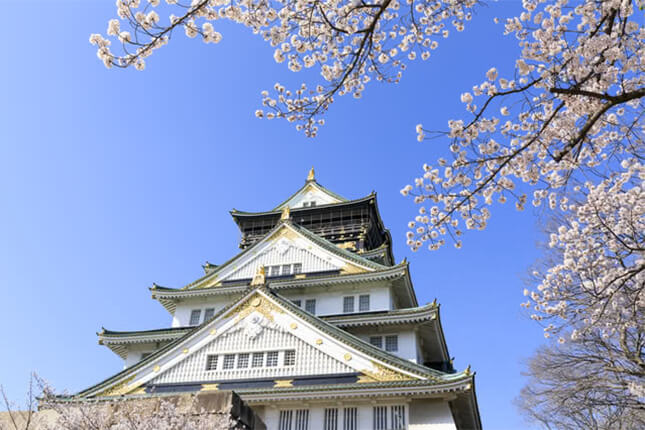 Osaka Castle is located in the central part of Osaka, which has several structures designated as important cultural properties. The Nishinomaru Garden is a notable site for its approx. 300 sakura trees. During sakura season, you can enjoy the lit up sakura in full bloom and the illuminated castle at the same time after dark.
Access：10-minute walk from Tanimachi 4-chome Station on Osaka Metro 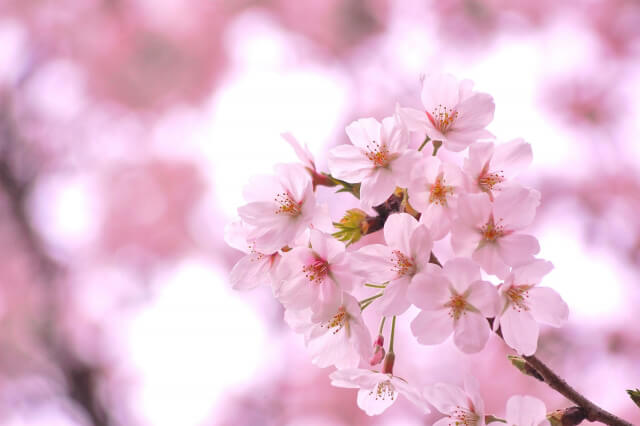 Shitennoji is the oldest Buddhist Temple in Japan. It is said that the prince Shotoku Taishi founded this temple to honor the shitenno; four heavenly kings of Buddhism. About 50 sakura trees bloom beautifully in the Gokurakujodo Garden, opened to the general public for a fee.
Access： 12-minute walk from Tennoji Station on JR Lines 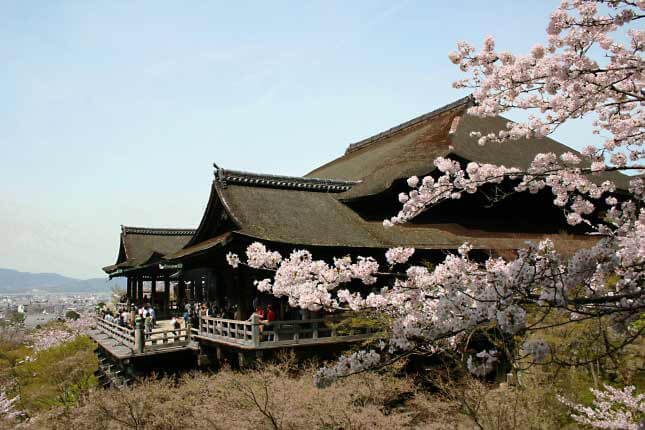 Kiyomizu-dera is a UNESCO World Heritage site known as one of the most famous and historic temple in Kyoto. Approx. 1500 sakura trees beautifully bloom in spring on the vast premises. You can enjoy the gorgeous harmony with the structure of the temple. It is one of the best sakura spot in Kyoto city too. The place is lit up during sakura season.
Access：Take a bus from JR Kyoto Station or Keihan Kiyomizu Gojo Station. Get off at Gojozaka stop and walk 10 minutes. / Take a bus from Hankyu Kawaramachi Station. Get off at the Kiyomizu-michi stop and walk 10 minutes. 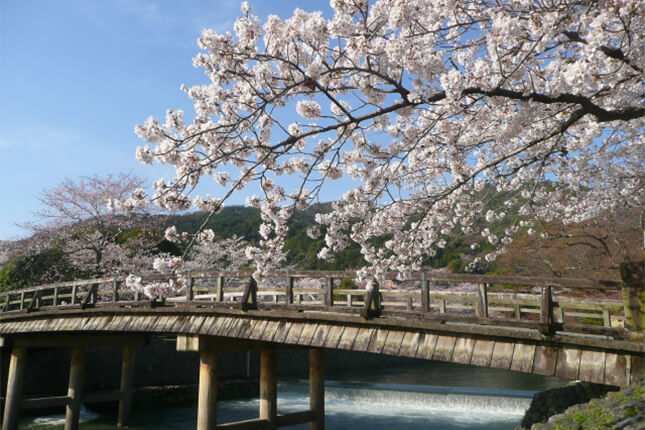 You can fully enjoy the magnificent spring scenery of sakura at Arashiyama, designated as one of Japan's Top 100 Cherry Blossom Viewing Sites. It is recommended to view sakura over the Togetsukyo Bridge, a symbolic representation of Kyoto, and the Katsura River.
Access：5-minute walk from Arashiyama Station on Hankyu Arashiyama Line or Keifuku Randen Arashiyama Line 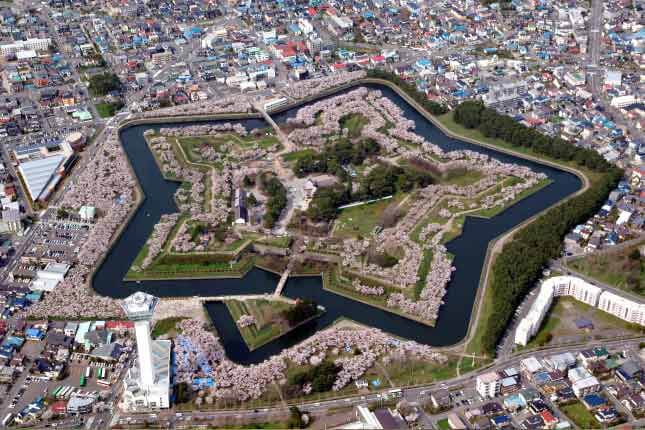 Goryokaku is a fort shaped beautifully like a star with five ridges. It is very elegant and tasteful to see the surface of the moat filled with petals when sakura blooms in spring.
Access：Take a Hakodate City Tram bound for Yunokawa in front of Hakodate Station. Get off after about 16 minutes at Goryokaku Koen Mae stop and walk for 15 minutes. 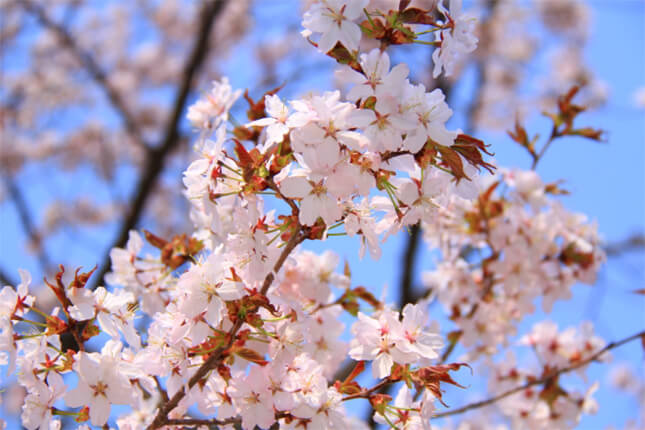 This park is located north of the Mt. Maruyama Primeval Forest. There are about 150 sakura trees such as sargent cherry in the park. The best time to view sakura in full bloom is from late April to early May.
Access：5-minute walk from Maruyama-Koen Station on the Sapporo Municipal Subway Tozai Line