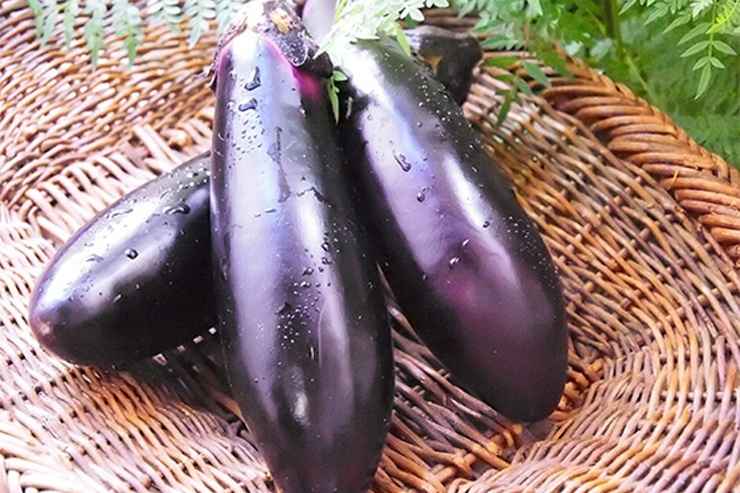 The luckiest vegetable in Japan. Nasu.

Nasu (Japanese eggplant) became a symbol of happiness in Japan because its pronunciation is the same as for the word "achieve." There is even a popular idiom, "Mount Fuji first, hawk second and eggplant third" that ranks nasu third in the list of auspicious things that can appear in your first dream of the year. Nasu have been cultivated in Japan for the last 1200 years and are commonly eaten in homes as well as at restaurants. They taste great, whether grilled, boiled, baked or fried, and contain potassium that helps cool down your body in the hot summertime. We especially recommend eating them grilled as an appetizer with soy sauce, grated ginger and dried bonito flakes. Simply delicious!

Access
Six minute walk from Fujisawa Station South Exit. From the intersection of Route 32 Minamifujisawa, turn left at the second road, and keep going for a while.

Access
A 5-minute walk from exit 3 of Gaiemmae station. Turn right at Bell Commons, and we will be at the first building you see after turning right from the optician "Masunaga".

Access
Head toward the bus terminal from the ticket gate of Fujigaoka Station. Cross the pedestrian intersection, and it will be located on the second floor of the Softbank Shop building.

Access
A three minute walk from number 12 exit of Sakae Station on the Higashiyama Line.

1 2 3 4 5 6 7 8 9 10 11 Next >>
Please select the restaurants you are interested in from the list for area, with the Eggplant menu.
Please check the "Eggplant" page for various information such as the best season for Eggplant.
Search restaurants from the Tokyo Area, Near Tokyo, Kyoto and Osaka Area, Hokkaido Area, Northern Honshu (Tohoku), Central Honshu (Chubu), Western Honshu (Chugoku), Shikoku, Kyushu, and Okinawa and Southeast Islands.
Search restaurants from the Japanese, Taverns, Western, Italian/French, Yakiniku/Steak, Dining bar, Chinese, Bars (pubs), Sosaku (creative), Party/Amusement, Cafe/Sweets, Ramen (noodles), Other Asian, Global/International, Other, Curry, and Buffet.