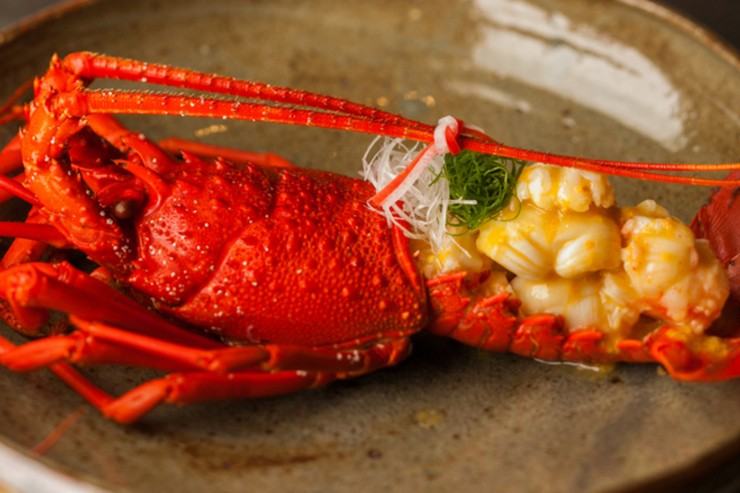 Iseebi (Spiny Lobster) is one of important aquatic resources. Chiba prefecture has the largest catch of Iseebi in Japan then, Mie prefecture.
Also, Iseebi is designated as prefectural fish of Mie (in 1990).
Back in the Edo period, in some writings a story is written about that Iseebi being sold at an extremely high price in Edo and Osaka. As Daimyo give away Iseebi as a gift of early spring.
Still Spiny lobster is known as decoration of New Year’s and wedding because of the vivid red color when its boiled. There is an interesting way to fish Iseebi. divers wave a pole with an octopus on it and catch them with a net when they come out in shock as octopus is their natural enemy.
You can taste Iseebi in several cuisines such as Sashimi, Iseebi soup, Fried, Steak, Hot pot, and Paella.

Access
Three minute walk from the A2 exit of Ginza Station on the Tokyo Metro Lines. Turn west at Ginza 6-chome intersection, located on the fifth floor of the Kojun Building.

Access
Three minutes on foot from the 1C exit of Roppongi Station on the Tokyo Metro Hibiya Line.

Access
A two minute walk from exit 1 of Azabujuuban Station's Namboku Line. The serene black walls will be your landmark.

1 2 3 4 Next >>
Select the restaurants you are interested in from the recommendations.
With SAVOR JAPAN, you can search recommended restaurants according to your search criteria such as area, budget, and cuisine.
You can search restaurants by selecting cuisines; Japanese, Taverns, Western, Italian/French, Yakiniku/Steak, Dining bar, Chinese, Bars (pubs), Sosaku (creative), Party/Amusement, Cafe/Sweets, Ramen (noodles), Other Asian, Global/International, Other, Curry, and Buffet.
You can also search restaurants by selecting areas; Tokyo Area, Near Tokyo, Kyoto and Osaka Area, Hokkaido Area, Northern Honshu (Tohoku), Central Honshu (Chubu), Western Honshu (Chugoku), Shikoku, Kyushu, and Okinawa and Southeast Islands.