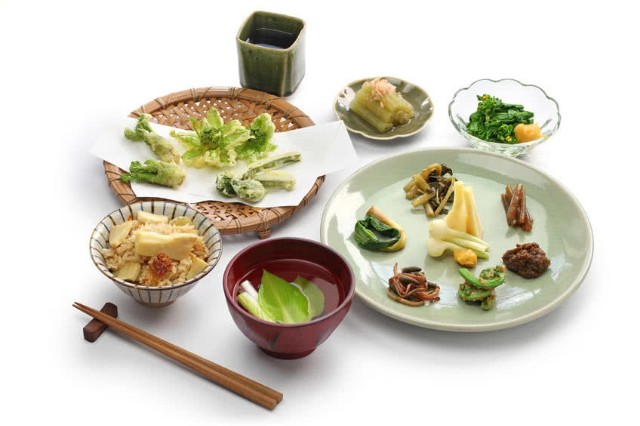 >Shojin ryori is the traditional dining style of Buddhist monks in Japan, and grew widespread in popularity with the spread of Zen Buddhism in the 13th century. As the cuisine is made without meat, fish or other animal products, it can be enjoyed by vegans, vegetarians and meat-eaters alike.

END_OF_DOCUMENT_TOKEN_TO_BE_REPLACED

A typical shojin ryori meal is centered around soybean-based foods like tofu along with seasonal vegetables and wild mountain plants, which are believed to bring balance and alignment to the body, mind, and spirit. This simple meal contributed to Japan’s elegant haute cuisine called kaiseki, and today can be eaten at the dining halls located in Buddhist temples across Japan.

Shojin ryori was introduced to Japan from China by the monk Dogen, the founder of Zen Buddhism, whose practice emphasizes seated meditation. Buddhist tradition forbade killing animals for human consumption, which was believed to cloud the spirit and interfere with meditation. As a result, the meals they ate were made without meat or fish and also abstained from the use of pungent flavors like garlic and onion. These principles became the foundation of shojin ryori. 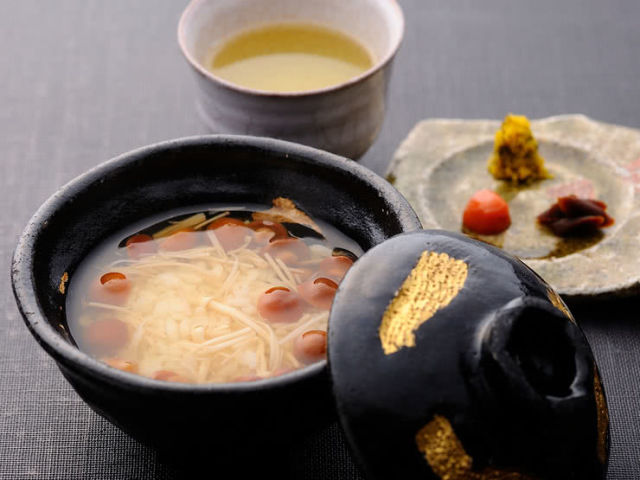 Despite the lack of meat, fish, or strong flavors, Japanese buddhist cuisine is far from bland. The monks use the “rule of five” when cooking, so that every meal offers five colors (green, yellow, red, black, and white) as well as five flavors (sweet, sour, salty, bitter, and umami), which are drawn out naturally from the ingredients rather than added via additional flavorings. This balance in color and flavor is believed to provide nutritional balance while also bringing the body into balance with the seasons. For example, in the summertime, cucumber and tomato provide refreshment to cool the body, while in the autumn and winter, root vegetables warm the body.Read: Japanese Ingredients - 8 Foods of Summer’s Seasonal Bounty 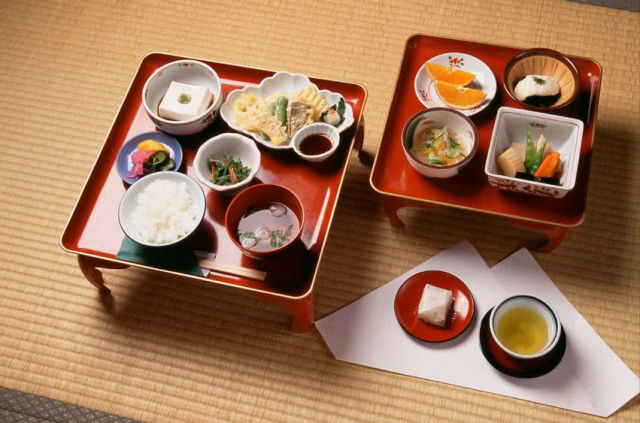 Shojin ryori is meticulously prepared so as to minimize waste, with even the carrot and radish peels and leafy green vegetable tops being used to make simple soup broth to accompany the meal.

The main ingredients used in shojin ryori are popular vegetarian Japanese foods like tofu and other soy-related products—abura-age (fried soybean curd), koya-dofu (dried tofu), and natto (fermented soybeans). Fu, a traditional wheat gluten food, is also frequently used, along with konnyaku, a thick gelatin-like food made from the konjac plant. These ingredients are joined by various vegetables that change with the seasons—tomatoes and eggplant in the summer, kabocha squash and sweet potatoes in the fall, and daikon radish and root vegetables in the winter. In the springtime, tender wild mountain greens such as fuki (butterbur) stalks and buds and the flowering nanohana (rapeseed) plant provide a gently astringent flavor.Try fuki at these restaurants in Japan 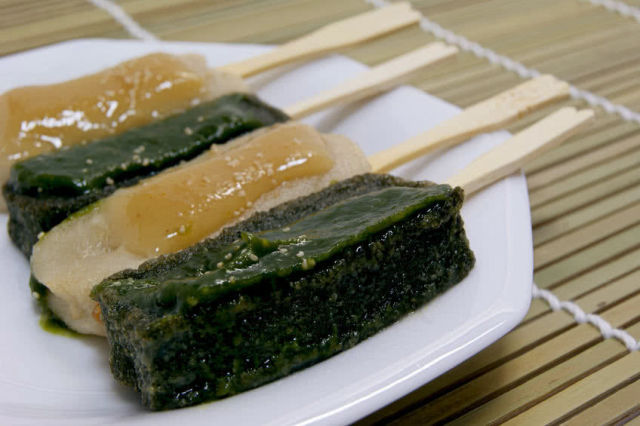 The main types of seasonings used for shojin ryori are dashi stock made with kombu kelp, as well as soy sauce, sake, mirin (sweet rice wine), miso (fermented bean paste), vinegar, and sesame oil. However, the seasonings are used sparingly and are only meant to draw out the true flavors of the vegetables, rather than mask them. 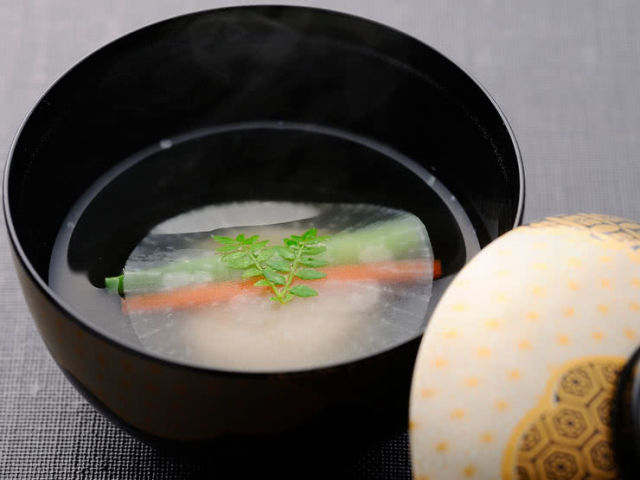 Eggs and milk were not traditionally used in Japanese cuisine because historically they were scarce in Japan. However, these days shojin ryori may use dairy products because modern monks believe that the use of milk is not harmful to the animals. If you’re vegan, be sure to ask ahead to be sure you’re getting a dairy-free meal.

A shojin ryori meal is usually structured around the principle of “ichi ju san sai”, or “one soup, three sides” plus rice and pickles. The soup can be anything from a creamy carrot or pumpkin soup made with soy milk, to kenchinjiru, a type of clear soup made with root vegetables, vegan dashi, and tofu. The sides are typically small dishes like goma-dofu (sesame tofu) garnished with freshly grated ginger or wasabi and a bit of soy sauce.Try Baked Sesame Tofu at Tokuuchiyama 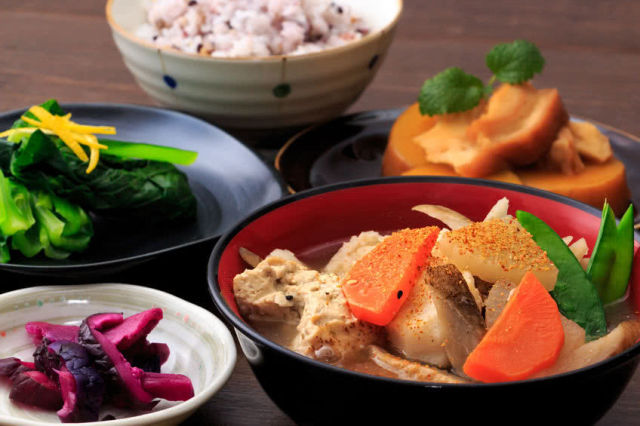 Other vegetarian Japanese food that appears commonly in shojin ryori dish is vegetable tempura, made with seasonal vegetables. The vegetables are marinated in miso-flavored water prior to being battered and fried so that each piece is flavorful enough to be eaten without dipping sauce. When eggplant is in season, nasu dengaku is also popular, a dish of deep-fried eggplant topped with a rich miso glaze.Try seasonal Vegetable Tempura at Kuzushi Kappo Tempura Take No An Higashi Ginza Branch 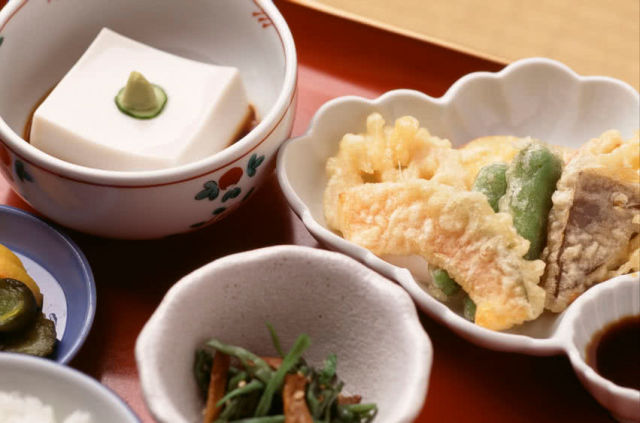 A shojin ryori meal may also contain traditional Japanese salads like shiro-ae, a salad of mashed tofu and vegetables flavored with soy sauce and sesame, and namasu, a raw-food salad made with julienned vegetables like daikon radish and carrot seasoned with vinegar. 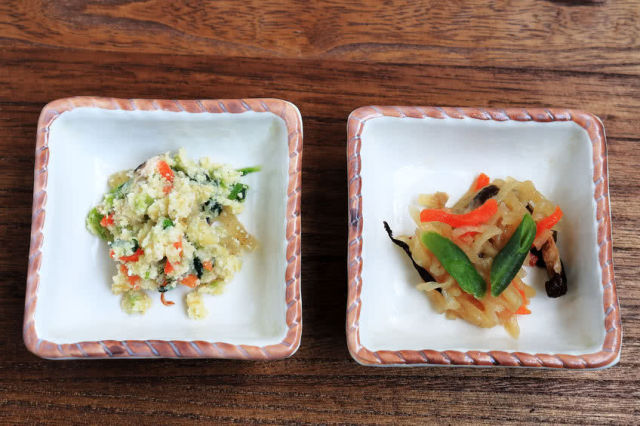 Where to Eat Shojin Ryori in Japan