>Osechi ryori refers to a beautiful and delicious medley of traditional Japanese new year food, usually eaten during the first three days of the new year. It has been enjoyed in Japan since the Heian period, when it was actually considered taboo to cook food during those first three days! As such, women spent the last few days of the previous year cooking and preparing a variety of dishes that kept well and could be eaten over the holiday. The foods are stored in a traditional multi-tiered lacquer box called "jubako" and eaten at room temperature.

While earlier osechi ryori consisted mostly of simple simmered and boiled foods called "nimono", over time a wide variety of dishes emerged, each of which was believed to bestow a different kind of luck or fortune upon oneself or one’s family. Read on to learn more about the osechi ryori—including the different meanings behind each dish and the ingredients that make them taste so good. 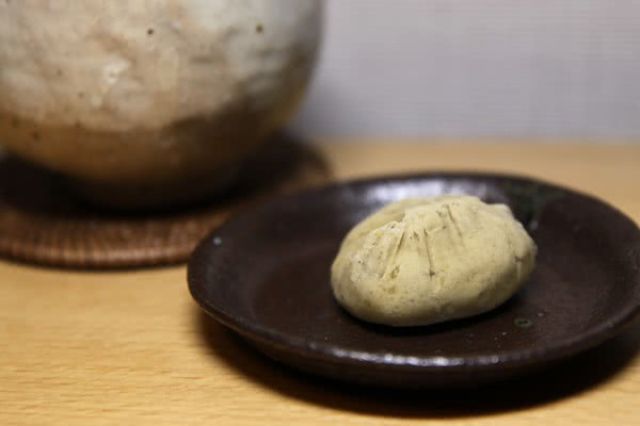 Photo by Eiko Eiko on Flickr[/caption]Kuri kinton is a paste made from kuri (chestnuts) and mashed sweet potato. as the golden-hued dumpling looks like a piece of gold, it’s believed to symbolize monetary fortune, a Japanese new year food as delicious good luck charm.Visit the Tokyo restaurant serving a chestnut mousse dessert 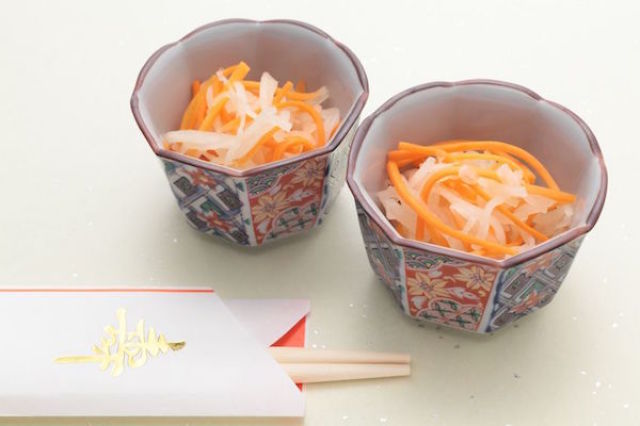 Kohaku namasu is a two-colored vegetable dish of julienned daikon radish and carrot. The vegetables are dressed in rice vinegar and left to sit a few hours, giving them a pleasantly mellow flavor. 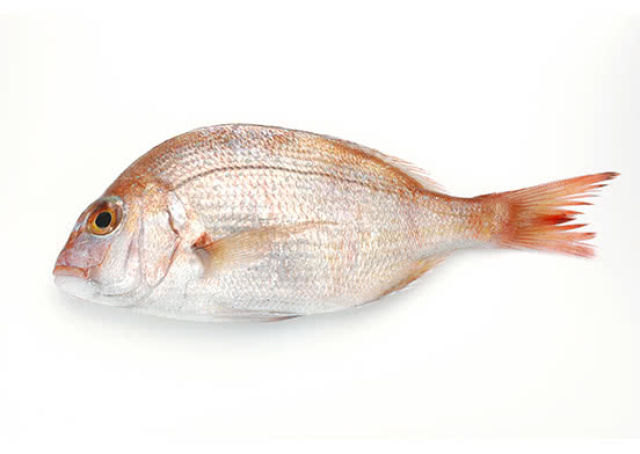 Tai, or red seabream fish, is considered a lucky symbol in Japan as the word “tai” sounds similar to the last syllable in the Japanese word for "celebrate", "omedetai". In addition to its good luck symbolism, the fish has excellent flavor and texture, so it is no wonder that tai is a popular a Japanese new year food, as well as a common culinary feature of weddings and other celebrations.Browse seafood restaurants in Japan 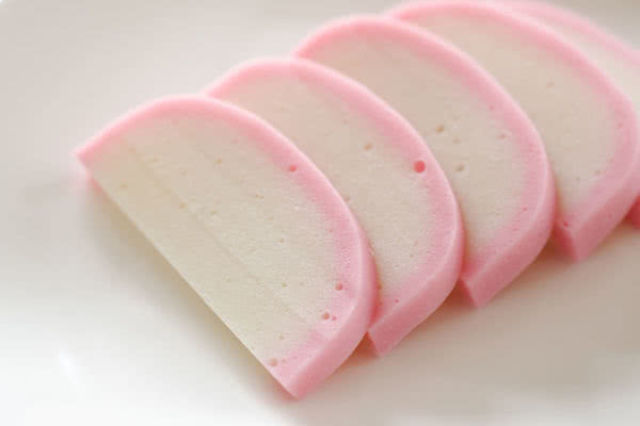 Kamaboko is a two-colored fish cake of red and white fish paste. Red and white are traditional New Year’s colors in Japan. They represent the rising sun and together have a festive meaning, making them highly appropriate colors to include in a celebratory osechi ryori dish. 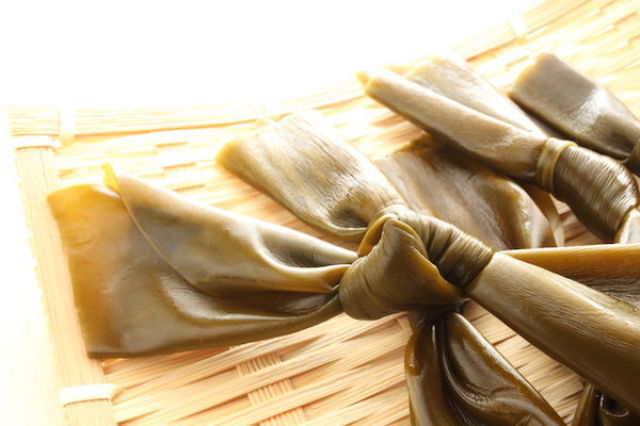 Kombu maki features pieces of kombu seaweed wrapped tightly, often around a piece of salmon, and tied with a thin strip of kanpyo gourd. The kombu rolls are then simmered in a broth of dashi, mirin rice wine, sugar, and soy sauce for maximum umami flavor. 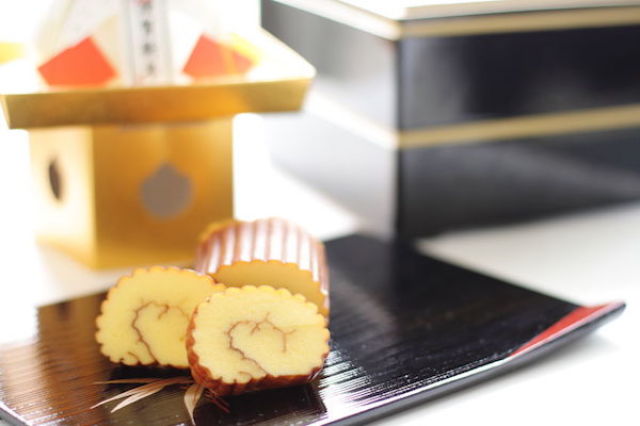 Datemaki is a sweet rolled omelet mixed with shrimp or fish paste. Because of its scroll-like shape, datemaki is typically eaten for good luck in one’s academic pursuits. 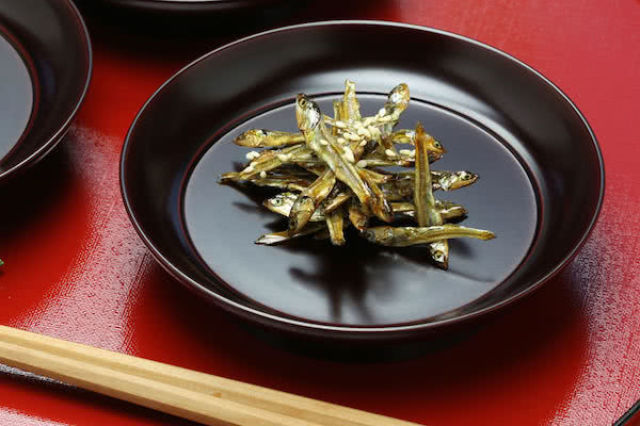 Tazukuri is a dish of dried baby sardines or anchovies caramelized in sweetened soy sauce. They are meant to symbolize a bountiful harvest; if you find yourself eating osechi ryori, in a sense you are already reaping the benefits of last year’s plentitude. 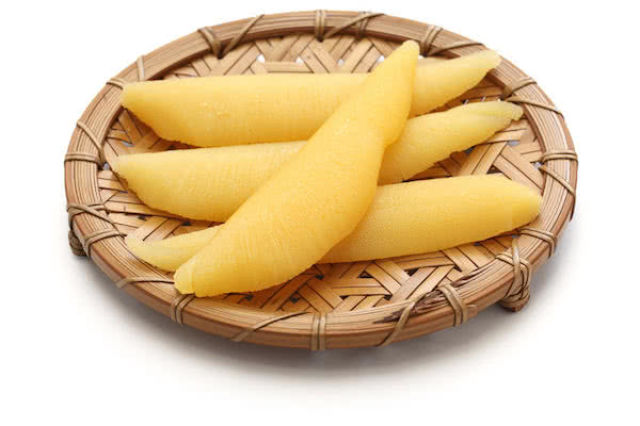 Kazunoko is herring fish roe. Because the name sounds like “many children”, eating kazunoko was believed to bestow good luck on one’s descendants or to bring a couple fertility.Read more about Kazunoko 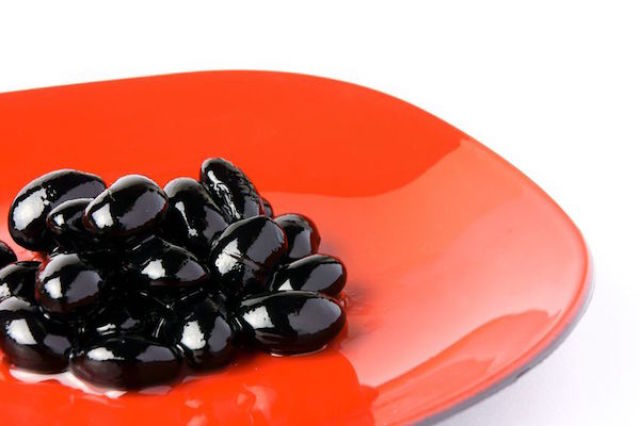 Kuromame and otafuku-mame are two kinds of beans traditionally eaten as Japanese new year food. Kuromame are boiled black beans with a sweet flavor, while otafuku-mame are much larger broad beans cooked until they are soft and sweet. The word “otafuku” sounds similar to the phrase “many fortunes”, while “mame” (meaning “bean”) sounds similar to the Japanese words for “diligence” and “good health.” 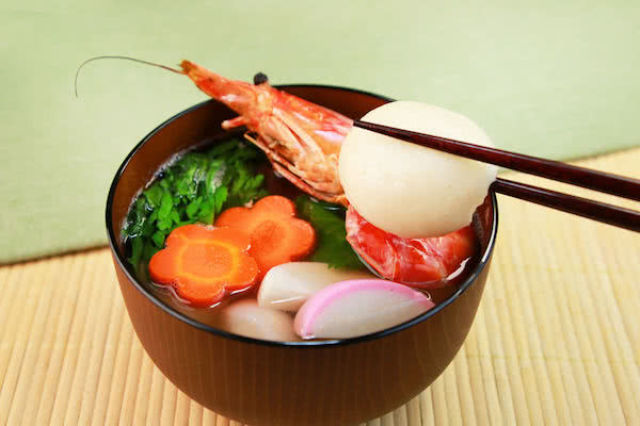 Ozoni is a Japanese food comprising a clear broth seasoned with soy sauce and miso, and served with grilled mochi rice cake and vegetables. There are different regional varieties of ozoni all over Japan, making it one of the most widely enjoyed varieties of Japanese new year food. 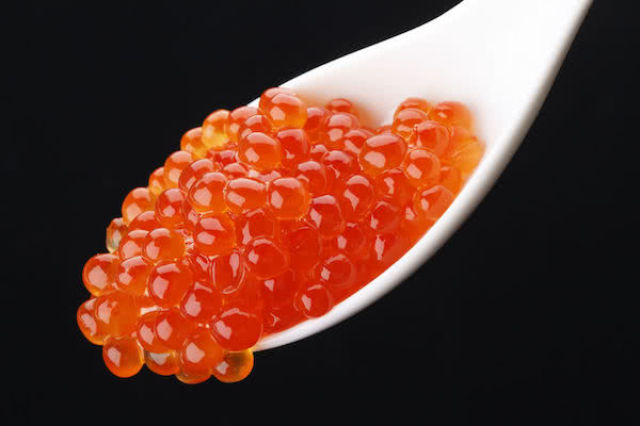 Ikura (salmon roe) is a dish of seasoned fish eggs that have been pickled in soy sauce. Eggs are a common symbol of fertility, while the bright red color of the ikura makes it a perfect food for many different celebrations in Japan.Visit the Hokkaido restaurant serving ikura donburi (rice bowls) 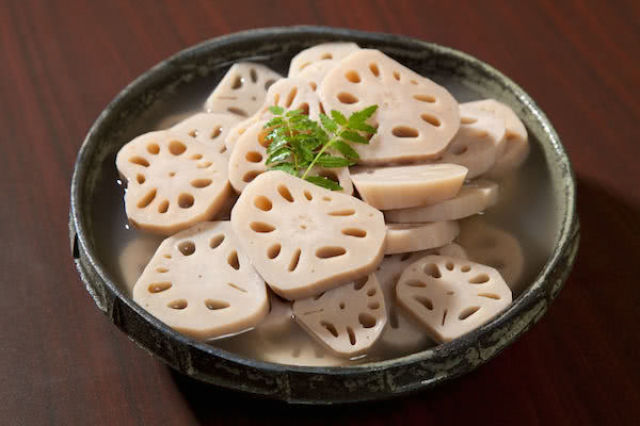 Renkon no nitsuke is a dish of sliced lotus root that’s fried and simmered in a sweetened soy sauce broth. The distinctive shape of the holes in the lotus root are believed to give a clear, unimpeded view of the future. 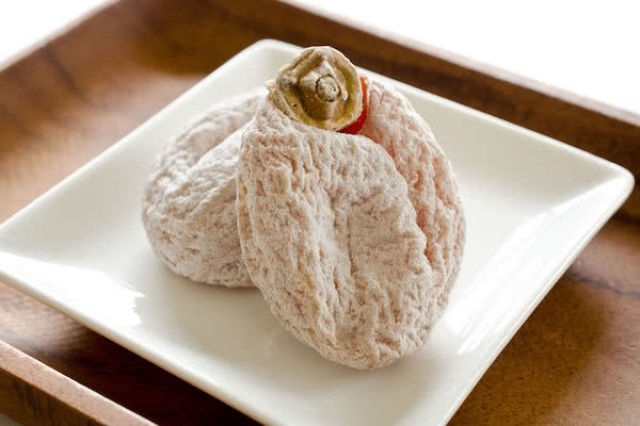 Hoshigaki, or dried persimmon, is not only a favorite winter food but also a symbol of longevity. The wrinkles in the dried fruit are said to represent old age. 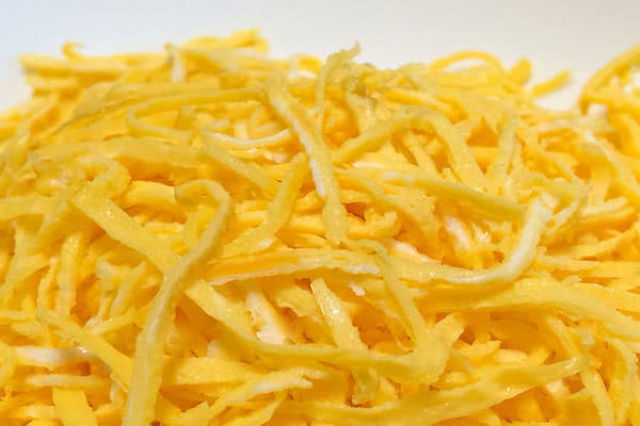 Photo by uka0310 on Flickr[/caption]Nishiki tamago is a sweetened egg dish made by separating egg whites from the yolk and mixing each separately with sugar. They are steamed in a mold to make a yellow and white egg cake, the yellow of which symbolizes gold and the white of which symbolizes silver, for prosperity and fortune. 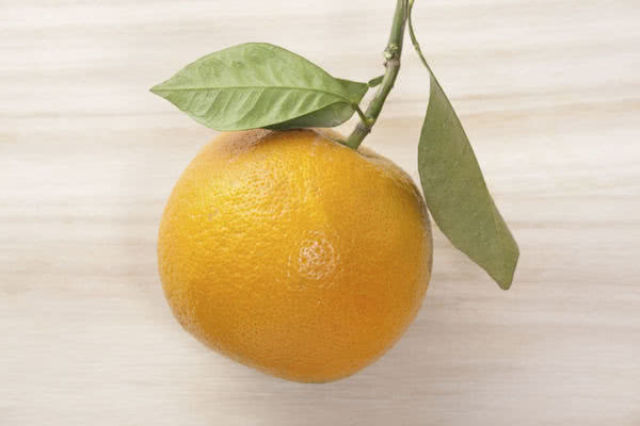 Daidai is a bitter orange from Japan that’s often used for decorative purposes during New Year’s celebrations and often included in osechi ryori. The word “daidai” sounds like the Japanese phrase “generation to generation”, so the fruit is believed to be lucky for couples wishing for a child. 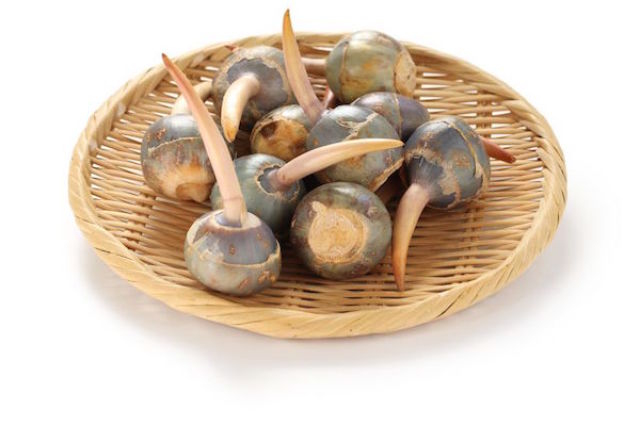 Kuwai is the Sagittaria plant, which produces an edible underwater tuber from which grows a single root. This single root is an auspicious sign in Japan that represents a successful career. Ebi, or shrimp, with their long whisker-like antennae and curved backs are believed to look like elderly people, so they’re a popular symbol of longevity.Find restaurants serving prawn tempura in Japan 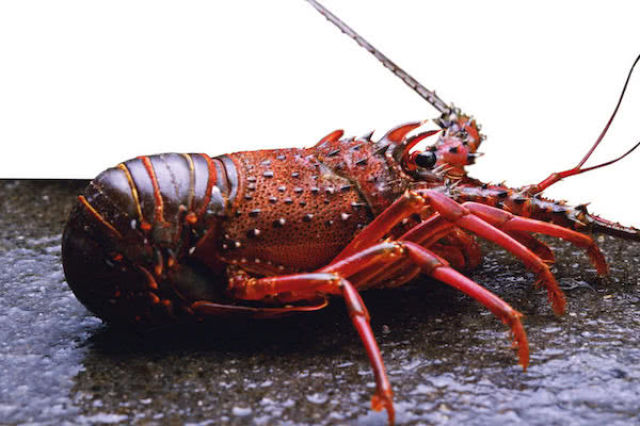 Yakizakana is a dish of grilled fish, which is believed to bring a successful career. Depending on the type of fish used for grilling, yakizakana may bring additional benefits.

Japanese New Year Food is Both Delicious and Auspicious

Osechi ryori is a unique Japanese meal that can only be enjoyed during the New Year’s holiday in Japan, where every dish has an auspicious meaning to complement the taste. If you are invited as the guest of a Japanese family, or have the opportunity to try an osechi meal in a restaurant.
Disclaimer: All information is accurate at time of publication.