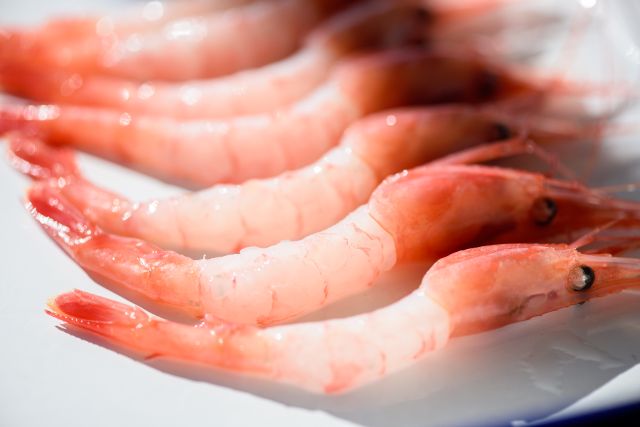 When asked about the local specialty of Fukui Prefecture, what comes to your mind? Echizen crab, or the king of the winter, would be a classic choice. Records claim that the oldest snow crab fishing in Japan was in Fukui Prefecture. During the Edo period, Echizen crab was one of the designated offerings for the shogunate. However, the crab is not the only seafood that can be caught here. The offshore from Tango-hantō to Noto-hantō peninsula, which is a fishing ground for crabs, is also a well-known spot for the amaebi sweet shrimp. The brand  “Fukui Amaebi” was established in 2021 with an aspiration to promote sophisticated jumbo amaebi as a local delicacy. To unearth the secrets to the sweet amaebi that melts in your mouth, we flew straight to Fukui.

END_OF_DOCUMENT_TOKEN_TO_BE_REPLACED 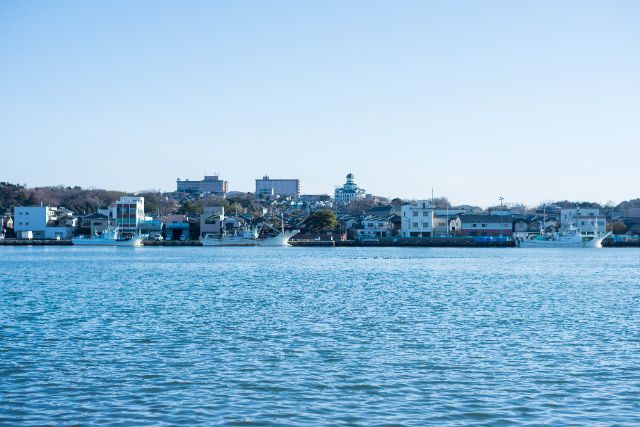 From Trade to Fishery ― The Development of Mikuniminato

With a 20-minute ride by car from JR Awara-Onsen Station, passing the tranquil cityscape, there appears Mikuni Port in Sakai, which is ranked the No.1 city in sweet shrimp fishing. No fishing was done today, suspecting from the number of mooring ships at the embarkment facing the Kuzuryū river. This is not a sea, but a river port for the ships to rest. Driving along the ocean and making a turn to the mountain, an elegant timeless cityscape showed itself.
The city where Mikuni Port resides is called Mikuniminato. It is an area with profound history as its name is mentioned in Shoku Nihongi (続日本記) compiled in 778. The town prospered for ferrying goods that it even qualified as Sanshin Shichisou (a collective term for prominent port cities in Kaisen Shikimoku (廻船式目)) during the Muromachi period. Around the spacious fluviomarine of the Kuzuryū river, the port was established. Accumulating the goods of Echizen using Takeda and Asuwa rivers, ships would depart from Mikuniminato to the Japan Sea, transporting them to other areas of Japan. 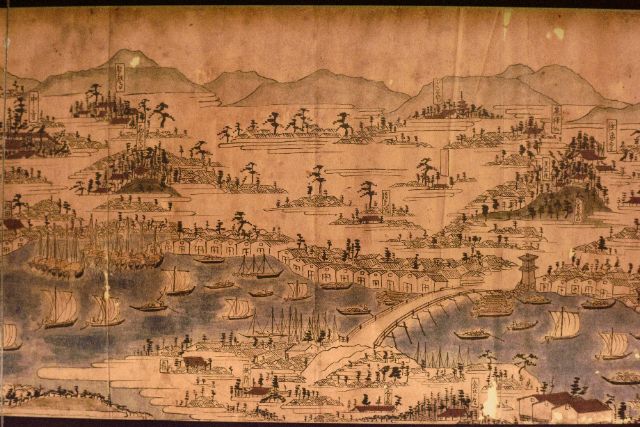 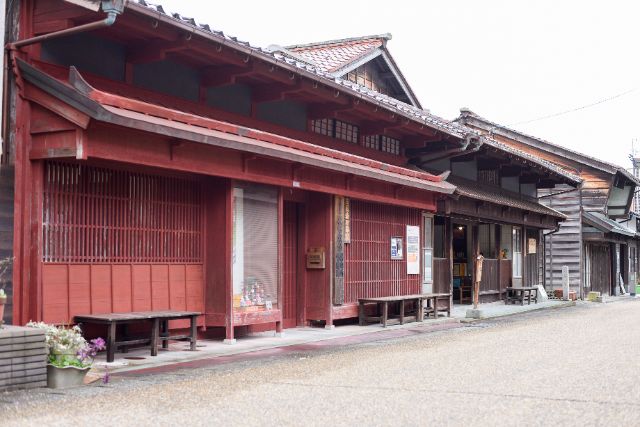 Entering the Edo period, Kitamaebune, a ship that ferries goods around the northernmost Hokkaido and western Osaka from the Japan Sea, was established. Here at Mikuniminato, many people joined the transportation business and the port thrived greatly as the stop for Kitamaebune. The area reached its peak of prosperity from the late Edo period to the early Meiji period with Kitamaebune. Back then 40 okiya (the lodging house of geisha) stood and the area also bustled as a red-light district. According to Mikunikan (1865), among the 1581 houses during those days, the most popular occupation was the shipwright amounting to 70 houses, and then carpenters and blacksmiths with 40 houses each. Only two households had made a living selling fish. It is apparent that the city was bustling as a trading port. This flourishing past can be identified through the still-surviving bank established by the Morita family, who built their fortune out of Kitamaebune.
However, its prosperity declined after train stations opened in the Meiji period and Mikuniminato ended its role as a trading port. Following that, the business transformed into a fishing port. And after being introduced to the powered fishing boat during the Taishō period, it drastically developed into a city of a fishery. 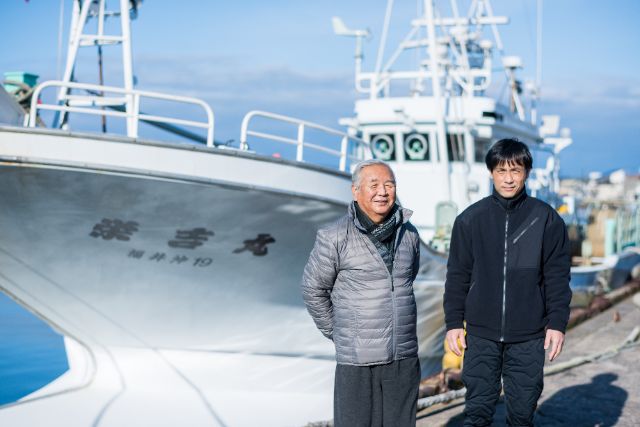 As Mikuni transformed from trade to fishery, the port is known for its fresh and sophisticated seafood, the most popular being the Echizen crab offered to the Imperial Family every year. The mainly fished marine lives are in the following order of catch: Echizen crab, amaebi, and mackerel.
Surprisingly, amaebi has a very short fishing history. Masakatsu Hamade, who is the president of the representative governing body of Mikuni Port Dragnet Fishing Cooperative Association claims that the root of the fishing is here in Mikuni.
“The fishermen knew for a long time that amaebi can be caught as they were accidentally caught in crab fishing. However, given that the shrimps settled 500 meters under the sea, no technology was available at the time to catch them pinpointed. It is said that shrimp catching started in 1958, as crabs were poorly caught.” Hamade noted that this oral theory might be wrong, but it is speculated that amaebi catching became a business around 1955.
According to the Fisheries Division of Fukui, the news article “Poor Catch of Crabs” on December 18th, 1957, states that “Due to the poor catch of crabs in 1958, fishermen in Fukui started amaebi fishing.”
Although starting its distribution in the postwar period, amaebi was comparatively newly introduced to the public because of its soft and fragile quality. Additionally, it deteriorates quickly, so it was difficult distributing it while maintaining its freshness.

The name amaebi originates from its sweet flavor. Academically, it is termed Hokkoku Akaebi.
Its ecology is quite extraordinary. All amaebi is born male to five years, and from six years onward, it undergoes sex reversal. It fertilizes biennially, and it spawns the eggs around March or April after being pregnant for a year. Spending the next year without eggs, it is fertilized again. In this cycle, the shrimp spawns approximately three times in their eleven years of lifetime.
The characteristic of amaebi is its unique sweetness that spreads when eating its translucent body. Hamade told us that the delicious taste is heavily related to time.
“Amaebi is sweet, thick, and creamy, right? The best time to eat them is from 24 to 48 hours after the catch. When they are freshly caught, peeling the shell is difficult and the body is firm. Their freshness deteriorates rapidly, so after over 48 hours, it gets musty and the body dissolves. Fukui’s amaebi is carefully designed to deliver them to the consumers at its best timing.”

[Fukui Brand] Preserving the Natural Resources for the Future 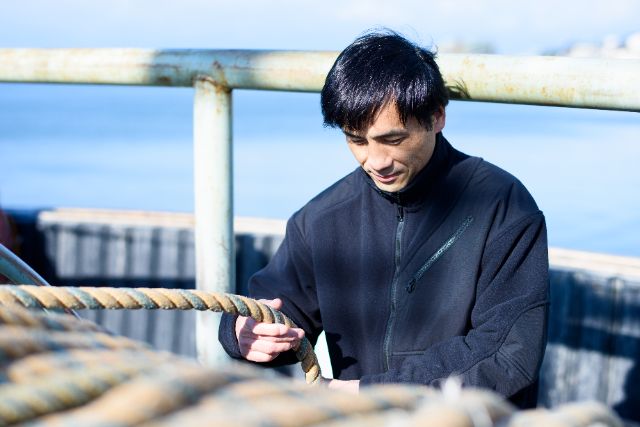 Delivering Fukui’s amaebi at its finest time―how does “Fukui Amaebi” make it possible?
Its product certification has three criteria. First is the size: of the five sizes, it needs to be above medium, large, or fertilized. Second is the fished season: it requires well-conditioned ones captured from May to January. The third criterion is that the auction is held within 24 hours from the capture.
Sure, there are other prefectures such as Hokkaido and Ishikawa that boast the catch of amaebi, but the auction held in the evening (fish auction is normally held in the morning), and the strict criteria make the ones in Fukui especially well-conditioned. 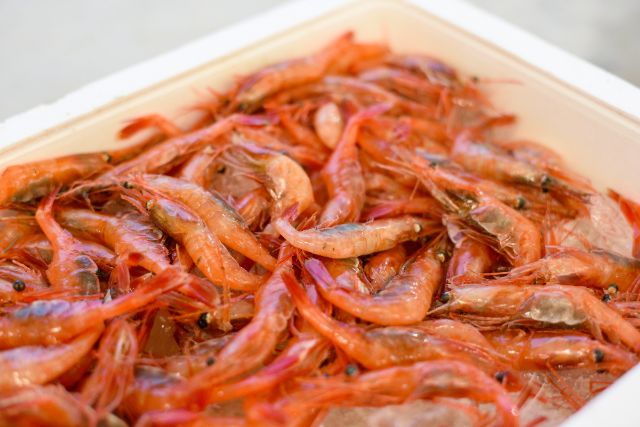 How about technological ingenuities? Eiichirō Hamade, who is the captain of Eikichimaru ―one of the nine danish trawlers that moor at Mikuni harbor― taught us how it's done.
“Amaebi shoals 500 meters underwater, so we use a dragnet called “Maedare Ami.” By floating the dragnet above the sea bed and pulling it precisely at amaebi’s habitat, other fish are not trapped. We carefully pull the net so as not to damage the soft body of the shrimp. After catching them, we deliver it after releasing the shrimps into a pool set at the temperature of two degrees which is a temperature akin to their habitat.” All of the processes are executed with care, and providing the most delicious shrimps starts with fishing. 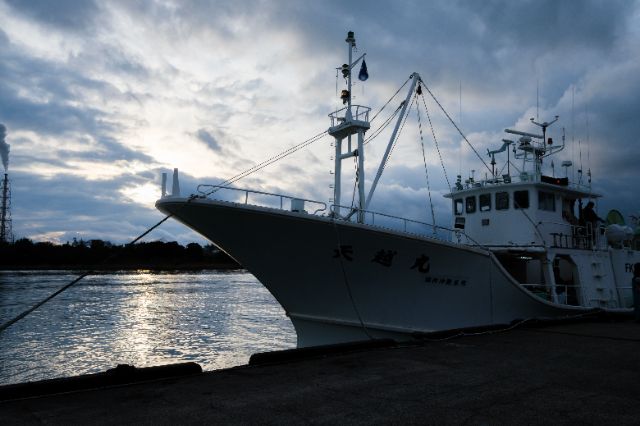 On top of that, fishing is conducted in a way that maintains marine resources. In the 1980s, there was a time amaebi was poorly caught due to overfishing.
Eiichirō Hamade explains, “To stop overfishing, we make it a rule of the cooperative association to trawl for amaebi only twice a sail. When the catch is poor, we allow trawling three times. My ship aims for about 1000 pounds per fishing.”
Waking up at 12:00 am, the fishermen depart the port at 1:00 am. Around 5:00 am, the ship arrives at the fishing ground and starts fishing. The second fishing starts at noon. Leaving the fishing ground around 4:00 pm and arriving around 7:00 pm, the fishermen swiftly start preparing for the evening auction. Sorting is performed on the ship. As there are more sorting criteria than in other prefectures, the process is difficult. On top of that, the shrimp is extremely delicate, so “it might get burned” if touched with a bare hand. Thus, sorting is performed with rubber gloves, without touching the shrimp unnecessarily. 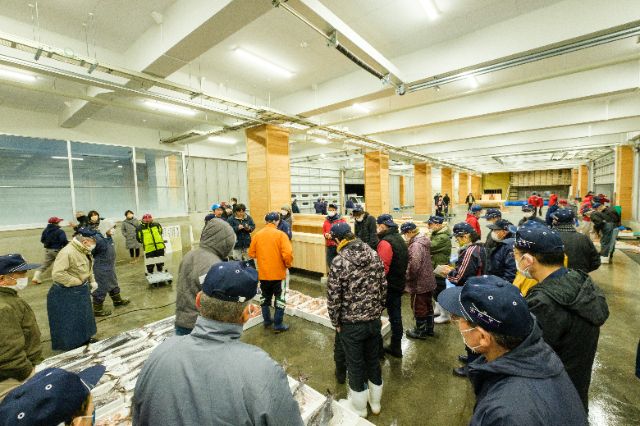 After all that hard work, neatly-boxed sweet shrimps are put into the evening auction around 7:30 pm. Thus, without passing 24 hours (but surprisingly in about 12 hours) amaebi is auctioned. Carried by lorries at night, the shrimps arrive at Kanazawa or Osaka in the morning―approximately from 24 to 48 hours after the catch―when it is the best time to eat the shrimp. Such are the Mikuni’s advantages; its proximity to the fishing ground and the swiftness of distributing freshly caught amaebi.
The bodies of the freshly-caught shrimps glow. The expensive ones are the large female amaebi with roes. Compared to the past, the demand for amaebi has increased, as they are more often used in dishes such as sashimi, sushi, Italian, and French cuisine. Locals have a high expectation for “Fukui Amaebi” as well. 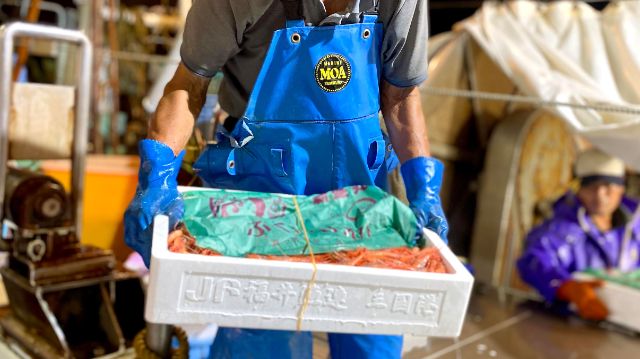 “Making amaebi the leading brand of Fukui” is the proposal that Mikuni Port Dragnet Fishing Cooperative Association suggested to Fukui Prefecture for a long time. Behind this proposal was the critical issue for fishermen: the poor catch of Echizen crab.
“Overfishing has caused the decrease in the catch of Echizen crab. At this rate, we won’t be able to hand down the marine resources to future fishermen. Amaebi is a marine product that is caught stably throughout the year. With all the gratitude for amaebi, we thought of giving it the right price for the sophistication resulting from the gentle operation of the fishermen in Mikuni. Amaebi is a sea treasure. We have to coexist with the ocean by controlling the number of catches,” president Masakatsu Hamade spoke with the ocean before his eyes.
From trade to a fishery, residents in Mikuni lived strongly through the dynamic changes in the course of history. The future of fishing and the sea considered thoroughly by those who lived with them―such anticipation for the bright future is in this creamy and sweet “Fukui Amaebi.”
Disclaimer: All information is accurate at time of publication.

Our goal is to take your culinary journey to the next level by helping you find the best restaurant. With SAVOR JAPAN, you can search and make reservation for END_OF_DOCUMENT_TOKEN_TO_BE_REPLACED that matches to you perfectly.