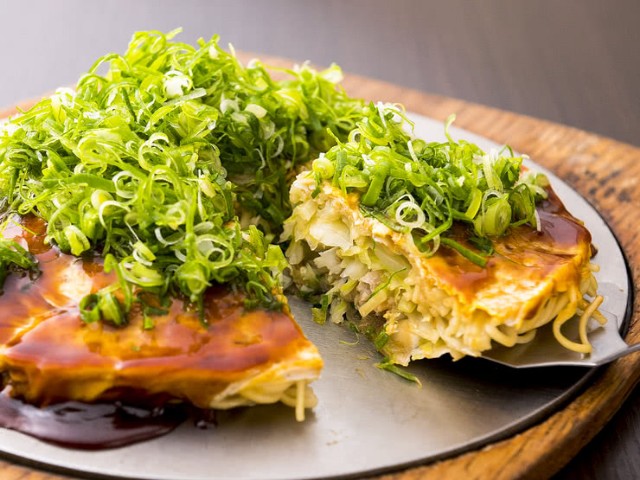 >Okonomiyaki is a regional dish from Osaka, a city from western Japan whose residents are well-known for their love of good food and good drink, especially with family or friends in tow. Osaka is home to a number of famous street foods, and okonomiyaki is one of the very best. Read on to learn exactly what okonomiyaki is, what’s different about two delectable styles it comes in, and most importantly, how to make okonomiyaki and enjoy it for yourself whether at home or dining out.

END_OF_DOCUMENT_TOKEN_TO_BE_REPLACED

A kind of savory Japanese pancake or omelet, okonomiyaki contains various ingredients mixed together and cooked on an iron teppan griddle. The dish gets its name from the expression “however you like it” and can be easily customized to one’s tastes, including made with vegetables only for vegetarians.

Although a pancake seems like a modern invention, fully answering the question, “What is okonomiyaki?” actually requires a look back to the time of the samurai.  Okonomiyaki originated from a thin pancake from the Edo period called funoyaki that was served at Buddhist ceremonies. Later, during and after the war, when food was scarce in Japan, it became more and more common to eat wheat pancakes made with whatever was available on hand to mix into them. These dishes eventually evolved into the okonomiyaki of today, their countrywide popularity helped by the spread of iron teppan dishes throughout Japan. Calling okonomiyaki a Japanese pancake, though, is an oversimplification: Much as American pancakes vary by state, okonomiyaki also has several tasty regional variations. 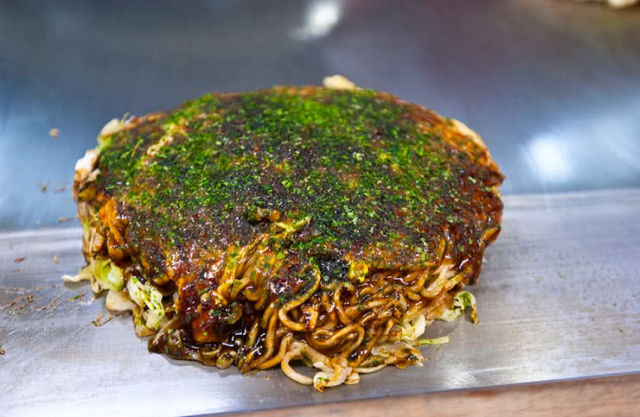 Although the dish originated in Osaka, there are two main styles of okonomiyaki: the Osakan version with the ingredients mixed together, and a version called Hiroshima-yaki from nearby Hiroshima prefecture. Hiroshima-yaki starts with a thinner crepe of batter to which fried ingredients are added in layers, rather than mixing them together. Hiroshima-yaki also tends to contain yakisoba fried noodles, which is not common in Osaka-style okonomiyaki. Other similar dishes include negiyaki, a flour pancake that’s a bit thinner and made mostly with green scallions, and monjayaki from the Tokyo area, which is also inspired by funoyaki but has a runnier batter. Styles of okonomiyaki also tend to vary by restaurant as much as by region, proving that hard and fast rules about how to eat okonomiyaki simply don’t exist. 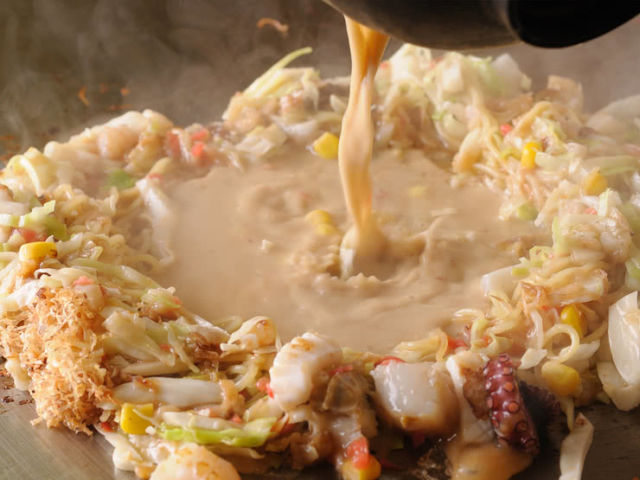 What began as a regional food of the Kansai area in western Japan can now be enjoyed everywhere in the country from open-air food stands to izakaya pubs, upscale teppanyaki restaurants, and even at home. Okonomiyaki is not very difficult to make at home, and because the dish can be made as one likes, it’s easy to throw together with whatever ingredients one has on hand in the pantry.

How to Make Okonomiyaki 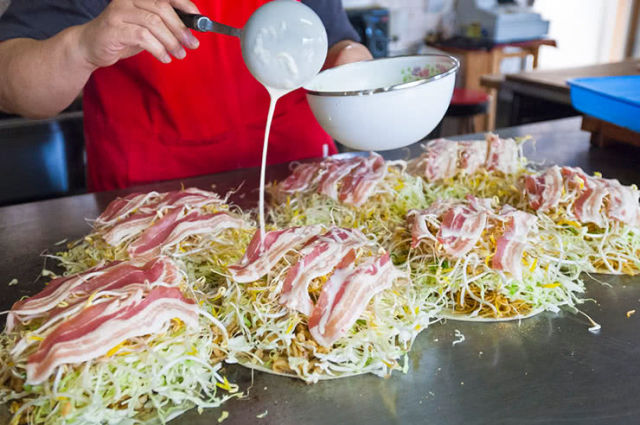 There is no magic in how to make okonomiyaki. In terms of kitchen equipment, okonomiyaki only requires a large mixing bowl for combining ingredients, a teppan iron cooktop—although a non-stick frying pan will do just fine—and a spatula or two for flipping the pancake. To make the batter, okonomiyaki requires flour and eggs, as well as some dashi for a touch of umami flavor and grated nagaimo yam or silken tofu to add to the texture of the batter. For ingredients, almost anything can be used, but some of the most common items include meat and seafood like pork belly and shrimp, as well as cabbage and green scallions. Some people also like to mix in items like miniature mochi rice cakes, cheese, crunchy bits of tenkasu tempura crumbs, and kimchi.

When eating okonomiyaki at a restaurant, the dish is usually prepared at an iron-topped teppan counter directly in front of guests by the chef, or tableside at special tables with a teppan cooktop built into them, where the dish can be prepared by the restaurant server or by the diners themselves. At restaurants where okonomiyaki and teppanyaki (teppan-style cooking) are not the main focus, the dish may be prepared in the kitchen and brought out to the table.Whether at home or at restaurants where diners can cook okonomiyaki themselves, the raw ingredients are usually prepared in a large bowl before cooking. To cook the okonomiyaki, first fry the meat and seafood on the teppan cooktop with oil before adding any other ingredients. Next, mix the batter with the vegetables in their bowl and pour this mixture over the cooked ingredients. Allow the pancake to fry until it’s cooked on one side, and then flip over once with the spatulas. It’s important to flip the thick pancake carefully to maintain the shape and so that it doesn’t break apart. At this stage, it can be helpful to cover the okonomiyaki with a pot lid which helps the ingredients cook all the way through to the center.

Once the okonomiyaki is done, it can be topped with condiments such as Japanese mayonnaise, sweet and fruity okonomiyaki sauce, dried bonito fish flakes, red pickled ginger, and aonori powdered seaweed to one’s liking. Slice it into 4 to 6 sections using the spatula and serve onto individual plates. Any extra pieces can be kept warm on the griddle until they are ready to be served. 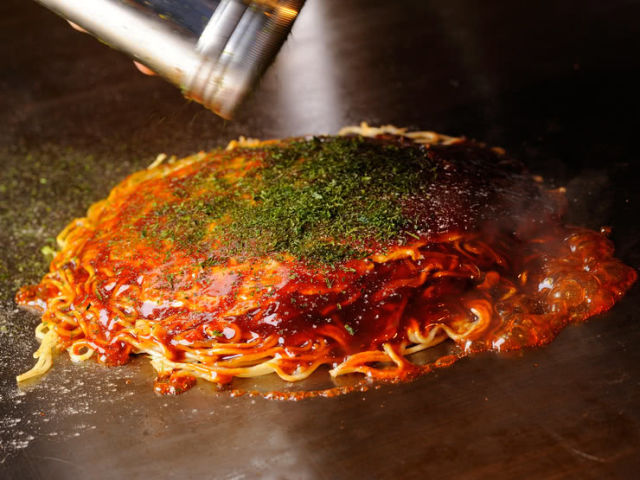 Okonomiyaki is More than Just a Japanese Pancake

Finally, the question of “what is okonomiyaki?” has brought us full circle. What began as a simple Japanese pancake eaten in times of scarcity is today a hometown favorite and a proud culinary emblem of Osaka, Japan’s gourmet city of food enthusiasts. Aside from its excellent taste, okonomiyaki is also an extremely “social” food--learning how to make okonomiyaki may even give you more chances to meet with family and friends!Whether you do so at home or, even better, at one of the numerous okonomiyaki restaurants throughout the country, visit Savor Japan for the best guide to okonomiyaki and other teppanyaki dining.