With the days growing colder, nothing quite satisfies like nabe, a type of Japanese hot pot. Named after the traditional clay pot (“nabe”) in which this dish is cooked and served, nabe is a steaming broth filled vegetables, tofu and with meat or seafood. Nabe has been enjoyed in Japan for as long as clay cookware has existed, and today there are many regional varieties featuring local ingredients specific to different areas. A hotpot meal is often enjoyed at home cooked on a small, portable gas burner while gathered around a heated kotatsu table with family or friends. It can also be enjoyed at izakaya and other restaurants specializing in Japanese cuisine.

END_OF_DOCUMENT_TOKEN_TO_BE_REPLACED In the northeastern Tohoku region of Japan, a specialty rice cake called “tanpo” is the centerpiece of kiritanpo nabe, the style of nabe local to Akita prefecture. The rice cakes are made by pounding freshly boiled rice into a paste, which is coated around thick skewers made from native Akita cedar wood and grilled around an open fire. Once toasted, the hollow tanpo cakes are cut into smaller cylindrical pieces for eating and added to a miso broth-based nabe, along with local Hinai fowl, burdock root, maitake mushrooms, Japanese leek, and seri herb (water dropwort). No visit to snowy Akita is complete without a steaming hot pot of kiritanpo nabe enjoyed with one of the delicious local varieties of sake. Fukuoka, located on Japan’s southern island of Kyushu, is home to some amazing local foods including mizutaki hot pot. Mizutaki is a style of nabe made by simmering Kyushu’s native jidori chicken on the bone for hours with Hakata spring onions and other seasonal local vegetables until the soup becomes rich and silky. It’s enjoyed year-round in Fukuoka with tangy ponzu (citrus-seasoned soy sauce) sauce. Located far in Japan’s snowy north, Hokkaido enjoys a style of hot pot called “Ishikari nabe”, named for the longest river on the island. Ishikari nabe is based on a traditional fisherman’s stew that was enjoyed on the shores of Ishikari River by people as they fished for salmon. It’s made with a hot miso-flavored broth and features Hokkaido salmon, tofu, and hearty Hokkaido vegetables such as potatoes and corn. Another famous Japanese hot pot comes from Fukuoka. Known as “motsunabe”, this dish features beef or pork giblets cooked in either a broth of either soy sauce or miso, along with garlic and chili pepper. The giblets are cleaned and blanched to remove any impurities before cooking, and the resulting flavor pairs well with the bold taste of the broth. Motsunabe is usually enjoyed with Kyushu’s regional liquor, shochu, and at the end of the meal, rice is typically added to the nabe pot to make a hearty porridge. 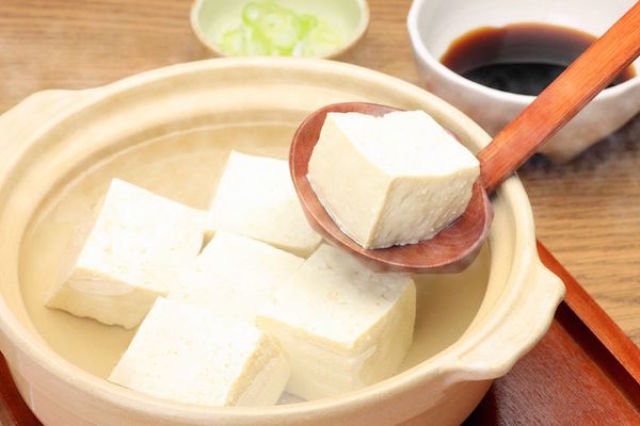 Yudofu from Kyoto is the simplest of nabe dishes, made with only hot water, kombu seaweed, and silken tofu. While for some people, the word tofu may conjure up an image of “plain” or “bland” food, high quality tofu like that found in Kyoto has a delicate sweetness of fresh soybeans and a creamy texture. For yudofu, fresh tofu is gently simmered in water gently seasoned with kombu and eaten with ponzu sauce and yuzu-kosho, a condiment of grated yuzu citrus and chili pepper.

Ibaraki is a prefecture in the eastern Kanto region that’s famous for anko, the deep sea monkfish that’s fished off of its coastline. This grotesque-looking fish is extremely rare and can only be eaten freshly caught. It’s used to make anko nabe, a winter delicacy featuring the skin and innards of the monkfish, along with vegetables, cooked together in steaming broth. 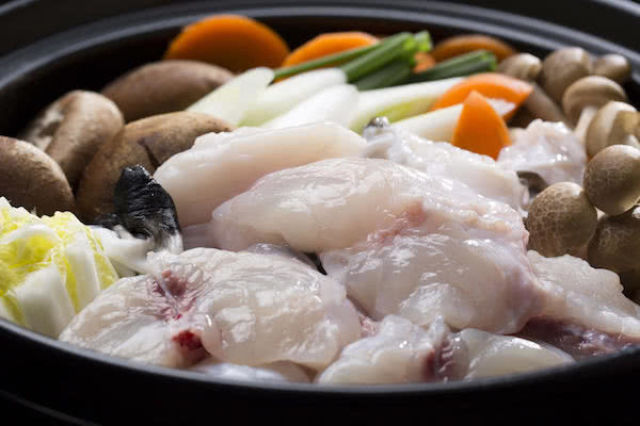 The Kansai equivalent to anko nabe is Yamaguchi prefecture’s tecchiri nabe, made with the infamous Japanese pufferfish, fugu. Fugu is a traditional food that has been eaten in Japan for more than 10,000 years since the Jomon period. It must be prepared by a specially licensed chef to remove the poisonous sections, and has a delicate flavor, despite the danger. Kamo nabe, or duck hot pot, is a specialty of the Kohoku region located north of Lake Biwa in Shiga prefecture. The area is home to wild waterfowl, which migrate from Siberia to fatten up for the winter. Although hunting in the wild is no longer permitted at Lake Biwa, kamo nabe is still a favorite local style of hot pot, and the sweet flavor of duck fat and firm duck meat goes well with vegetables, tofu, and Japanese leek. Hiroshima prefecture, located on the Seto Inland Sea, is famous for its oysters. They’re used in a popular local dish called “kaki no dotenabe”, or miso and oyster hot pot. Sweetened miso paste lines a traditional earthenware nabe dish into which broth, vegetables, broiled tofu, and thick juicy Hiroshima oysters are added. The miso can be mixed into the broth to adjust the flavor of the dish, along with freshly squeezed lemon. 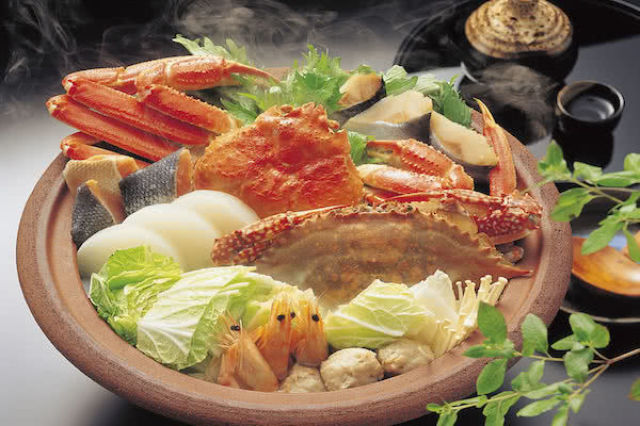 Another winter hot pot dish enjoyed in Hokkaido is kani nabe (crab hot pot). It’s made with fresh crab and winter vegetables cooked in a simple dashi broth made from kombu seaweed or katsuobushi (bonito fish flakes) with soy sauce. As the crab meat poaches, the broth and vegetables become infused with rich seafood flavor. After the meal, a hearty porridge called “kani zosui” can be made with the leftover broth by mixing in cooked rice and beaten egg. 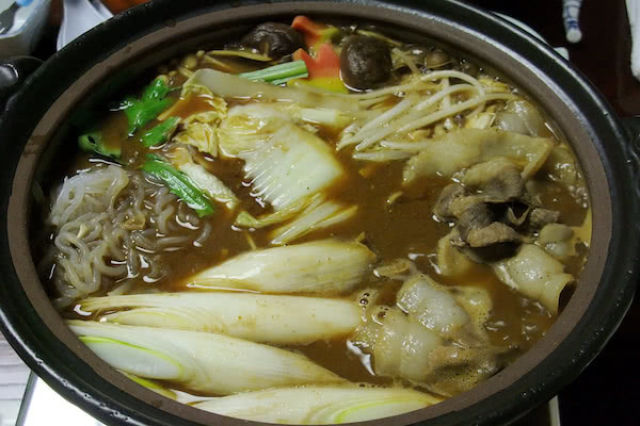 Wild boar is not a common part of the modern Japanese diet, but in the western region of Kansai, wild game is still hunted in the mountains around Osaka, Kyoto, and Hyogo prefecture. Botan nabe is a style of hot pot made with wild boar meat, called “shishiniku”, which has thick red meat with a wide outer strip of fat similar to pork belly. It’s cooked in a red miso broth until the gamey meat becomes tender. The flavor is quite unlike any other kind of nabe and is definitely worth experiencing.

With the endless varieties of nabe to try all over Japan, there’s no shortage of delicious food to enjoy during the cold winter months. Visit Savor Japan for the best guide to nabe restaurants and spectacular dining in every region of Japan.
Disclaimer: All information is accurate at time of publication.